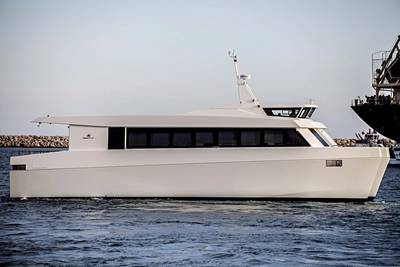 BMT Nigel Gee (BMT), a subsidiary of BMT Group, and Ares Shipyard announced that the first two boats of a series of eight luxury passenger ferries destined for Qatar, have been completed and delivered to the customer. BMT worked closely with Ares Shipyard to produce an innovative design with particular attention to ease of construction.  This has allowed the first two vessels to be delivered to the customer less than seven months after initial discussions on the project. The remaining six vessels will be delivered over the next four months with four currently in build.

Designed specifically to transport guests to the new Anantara Doha Island Resort & Spa, 11km east of Doha, the vessel is highly capable and has the visual appearance to match.  At 18m long with a beam of 6.7m, the composite catamaran design can carry up to 51 passengers in comfort and style.  Business class seating and refreshment facilities are provided on board within a fully air conditioned passenger saloon. The vessel is capable of a maximum speed of 29 knots, and a service speed of 22 knots meaning that a typical passage from Doha to the resort will be in the region of 16 minutes.

Kerim Kalafatoglu, Managing Director of Ares Shipyard commented, “In order to support the opening of the resort, it was important to deliver the first vessel early in 2014. BMT Nigel Gee proved again that it is one of very few design companies that can develop robust design solutions, whilst providing suitable levels of support during such an aggressive build schedule, without major discrepencies and delays.”