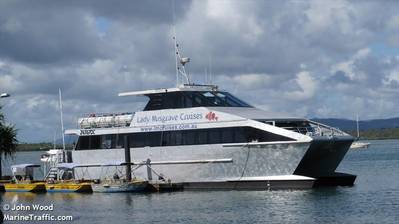 The company which owned Spirit of 1770, a passenger vessel that caught fire and burnt to the waterline with 42 paying customers and four crew members on board while returning from a voyage to Lady Musgrave Island on May 11, 2016, has been fined $25,000 for reckless operation of a commercial vessel.

The Australian Maritime Safety Authority (AMSA) investigated the incident and recommended a charge against the company, Panforta Pty Ltd – trading as 1770 Great Barrier Reef Cruises Pty Ltd. The charge was pursued by the Commonwealth Director of Public Prosecutions (CDPP).

On March 16, 2020, the company plead guilty in the Brisbane Magistrates court to one count of reckless operation of a commercial vessel, risking the safety of the vessel and the people on board under the Marine Safety (Domestic Commercial Vessel) National Law Act 2012.

The offense related to the company knowingly allowing Spirit of 1770 to be operated despite the vessel having serious, repeated overheating issues with its main engines.

During the investigation, AMSA also discovered that multiple masters who were skippering Spirit of 1770 had been directed by the company to beach the vessel in Round Hill Creek during low tides to allow passengers to be transferred on and off the vessel, instead of waiting for the tide to come in.

That was despite being given explicit advice from Maritime Safety Queensland not to beach the vessel. The vessel was not built for beaching maneuvers, which over time can compromise the structural integrity causing damage to the vessel.

One of the company’s directors also allegedly provided false documentation to investigators about the beaching maneuvers in the form of a Safety Management System with a forged signature falsely attributed to a former operations manager for the company.

AMSA General Manager of Operations said the company had ignored expert advice about operating the vessel within its limits, placing the safety of the vessel and everyone on board at risk.

“It is incredibly fortunate that no lives were lost when Spirit of 1770 caught fire,” Schwartz said.

“The company was reckless in ignoring the vessel’s maintenance issues and they endangered the lives of everyone on-board by continuing to operate.

“We know that the vast majority of operators take the safety of their passengers and crew seriously. This incident should be a lesson for those who do not, that ignoring your duty of care can have very serious consequences.”

USCG Oversees Disembarkation of 250,000 Cruise Ship Passengers Due to COVID-19

The disembarkation of more than 1,200 passengers from the cruise ships Zaandam and Rotterdam in Port Everglades, Fla. on Friday…