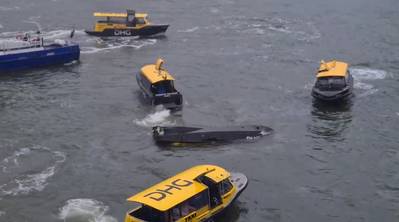 A sightseeing boat and a water taxi collided on Thursday near Rotterdam's iconic Erasmus Bridge, local emergency services said, and six people were "helped out of the water".

Images of the incident on social media showed the collision between the two vessels, with the smaller water taxi being pushed under water of the Nieuwe Maas river.

ANP news agency reported that the six rescued were all passengers and the captain of the water taxi, which it said later sank. The agency cited a spokesperson for Rotterdam's regional safety authority.

There were no reports of injuries. ANP reported that the passengers of the water taxi had been taken to hospital for observation.

Emergency services confirmed the collision and water rescues in a tweet and noted that water traffic near the bridge has been halted.