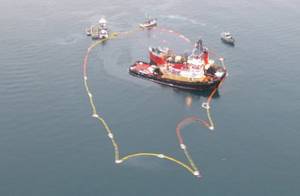 The Valdez Star begins preparation to lighter the tug Pathfinder south of Busby Island and is surrounded by containment boom with spill responders staged nearby Dec. 25, 2009. The Pathfinder crew had completed an ice survey and was heading back to its port in Valdez when the vessel struck the Bligh reef Dec. 23, 2009. (Photo courtesy of John Engles)

The Crowley tugboat Pathfinder, which grounded the night of Dec. 23 on Bligh Reefin Alaska, was stabilized on Dec. 25, at anchor near Busby Island surrounded by oil spill containment boom. A salvage team from TITAN Salvage has arrived at the scene and is evaluating the damage to the tug in preparation for lightering the remaining diesel fuel from two ruptured tanks to another vessel.

A light sheen of diesel fuel has been observed outside the boom containment area and is being recovered with skimmers and absorbents. No impacts to wildlife have been observed or reported.

"All of us at Crowley are deeply disappointed and saddened that this grounding occurred," said Rockwell Smith, senior vice president and general manager, Pacific/Alaska. "We regret that we've disrupted service to Alyeska and that fuel has been released into the water. We will get to the bottom of this and take all necessary corrective actions."

A joint investigation is underway by the U.S. Coast Guard and Crowley. The tugboat's master and second mate have been relieved of duty pending further investigation.

Crowley is currently working with the U.S. Coast Guard and the Alaska Department of Environmental Conservation in a Unified Command to develop a plan to remove fuel from the damaged tanks and tow the Pathfinder back to the Port of Valdez for more detailed assessment of damage.

The Pathfinder, a tug used primarily for ship assist at the Port of Valdez, was monitoring ice conditions in Prince William Sound and was en route back to Valdez when the grounding occurred.

"Crowley appreciates the prompt assistance of Aleyska response resources in addition to the Unified Command in coordinating this response" said Walt Tague, Crowley Incident Commander for the response. "Our objective is to mitigate the potential for further release of diesel fuel and relocate the vessel to a more secure moorage through safe and coordinated operations.