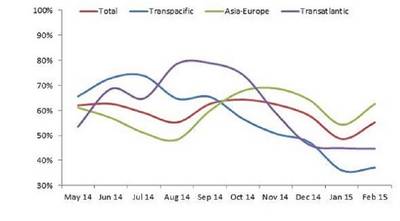 The on-time percentage of liner services improved slightly in February, but the ships that missed their berthing window missed it by a wider margin due in large part to labor strife at West Coast U.S. ports,  according to this month's Carrier Performance Insight from Drewry.

55% of ships in the three key East-West trades arrived within +/- 24 hours from the advertised ETA, up 6.6% against January’s historic low of 49%. The average deviation from the ETA to actual arrival, however, extended from 1.9 days in January to 2.1 days in February.

“The monthly on-timer percentage improvement was the result of higher reliability in the Asia-Europe trade, which seems to have benefited from more settled services now that the new alliance structures are in full swing,” said Simon Heaney, senior manager of supply chain research at Drewry.

“The Transpacific trade continued to suffer despite the mid-month resolution to the US West Coast labor contract dispute and was largely responsible for the longer overall deviation,” Heaney added.

Out of the 743 transpacific ships calling at either Los Angeles or Long Beach during February, only 8% arrived as planned, with the average deviation a huge 10.7 days. In January the same figures were 17% and 4.2 days respectively.

“The end of the USWC labor dispute and the bedding in of new alliance services should mean that reliability has hit the floor and will improve in the coming months, albeit slowly,” said Heaney.