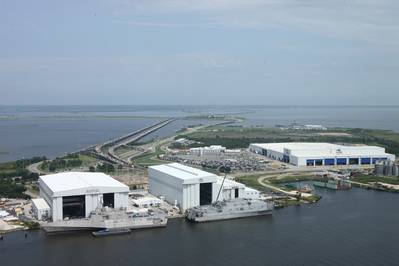 Austal USA's sprawling complex in Mobile, Alabama. JHSV 1 is the vessel on the right. (Photo: Austal)

The Navy's first Joint High-Speed Vessel, USNS Spearhead (JHSV 1), is scheduled to visit the Port of St. Petersburg beginning Sunday, Feb. 10.  The ship will remain in port until its departure Tuesday afternoon.  The port call is primarily a working visit and an opportunity for senior officials and military personnel from U.S. Central Command and U.S. Special Operations Command to visit the ship and receive short briefings on Spearhead's capabilities.

Built in Mobile, Ala., by Austal U.S.A., USNS Spearhead is designed for rapid, intra-theater transport of troops and military equipment. The U.S. Navy's Military Sealift Command owns and operates Spearhead, along with the nine other JHSVs that are currently under contract. Spearhead is a 338-foot-long aluminum catamaran designed for speed, flexibility and maneuverability. The reconfigurable 20,000-square-foot mission bay area can be quickly adapted to support a number of different missions - anything from carrying containerized portable hospitals to support disaster relief to transporting tanks and troops. Spearhead's crew of 22 civil service mariners works for MSC which operates, navigates and maintains the ship. JHSVs are capable of transporting approximately 600 tons of military troops, vehicles, supplies and equipment 1,200 nautical miles at an average speed of 35 knots, and are designed to operate in austere ports and waterways, providing added flexibility to U.S. warfighters worldwide.

"I am pleased that the USNS Spearhead, the first in a new class of ships, will make its first official port visit in St. Petersburg this weekend," said U.S. Rep. C. W. Bill Young, the chairman of the Appropriations Subcommittee on Defense.  "The Spearhead affords our nation's military leadership a new ability to quickly transport troops, equipment and supplies where they are most needed, anywhere in the world," he said. "This will be a working visit by the crew of the Spearhead and one of the primary reasons for its stop here is to allow our leaders of Special Operations Command and Central Command to come from their headquarters at MacDill Air Force Base to see this new ship and better understand its unique capabilities."

The Navy will eventually operate 10 joint high-speed vessels in support of regional combatant commanders around the world.

This week, various parties in Rotterdam will be launching a new pilot project, in which containers are handled and released…