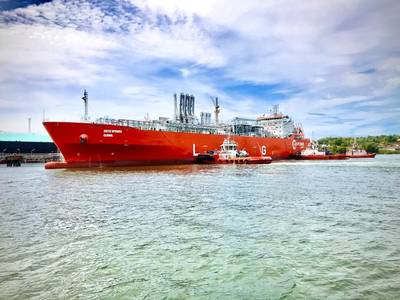 The state-owned company's subsidiary Petronas LNG delivered two LNG cargoes to Yangon, Myanmar, in May and June as part of a sales and purchase agreement it had signed with joint-venture company CNTIC VPower earlier this year, Petronas said.

As part of the deal, the cargoes were sold on a free-on-board (FOB) basis from the Petronas LNG complex at Bintulu, Sarawak, in East Malaysia, and totaled 190,000 cubic meters.

The first cargo was delivered into Myanmar on May 7 onboard LNG tanker CNTIC VPower Global and the second on June 3 onboard vessel Golar Kelvin, Petronas added.

"The two LNG cargoes that were successfully delivered to CNTIC VPower marks a new era in the growth of LNG demand in the South East Asian region," Abdul Aziz Othman, the chief executive officer of Petronas LNG Ltd said in the statement, adding that Myanmar is the latest nation to adopt LNG as a form of cleaner energy.

Petronas added that it is working with CNTIC VPower for further deliveries to facilitate its foothold in Myanmar's growing gas industry.

Last year, the consortium won three LNG-to-power projects in Yangon and the state of Rakhine totaling 900 megawatts through a tender issued by Myanmar's Ministry of Electricity and Energy's Electric Power Generation Enterprise.

The projects were expected to start this year to meet Myanmar's growth in electricity demand, which is increasing by between 15% to 17% annually, according to the statement.