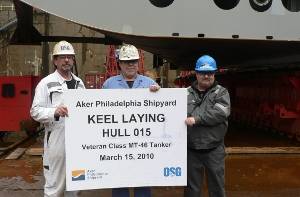 Aker Philadelphia Shipyard (Oslo: AKPS) held a ceremonial keel laying on March 15 for Ship 015, the 11th product tanker being built at the yard. This vessel will be sold to OSG America after delivery from Aker Philadelphia Shipyard and will have shuttle tanker features installed for use in the deepwater U.S. Gulf of Mexico. Shuttle tankers transport crude oil from deepwater areas where there are no available pipelines. Following long held shipbuilding tradition, coins were placed on one of the keel blocks that support the vessel during construction before the first section of the ship was lowered into place. These coins are a ceremonial sign of good fortune and safe travels. The small ceremony was conducted with representatives of Aker Philadelphia Shipyard and OSG America.

In its eleven year history, Aker Philadelphia Shipyard has completed the construction of 12 ships, eight product tankers and four containerships, with four additional tankers currently under construction. To commemorate its early containership series, the shipyard has partnered with the Independence Seaport Museum in Philadelphia to showcase a model of the original containership from the series. The model will be on display at the museum beginning March 25, as part of the museum’s new exhibit titled, “It sprang from the River! Everyday Objects with Maritime Secrets.” The exhibit will run through January, 2011.