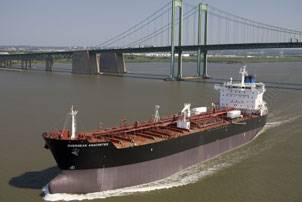 Aker Philadelphia Shipyard (Oslo: AKPS), a U.S. commercial shipyard, delivered to American Shipping Company (Oslo: AMSC) its tenth Veteran Class MT-46 product tanker. The 46,000 dwt vessel, named the Overseas Anacortes, will leave the shipyard in the coming days under the operation of OSG America to transport petroleum products for Tesoro. This vessel is the fourth vessel planned to be utilized by Tesoro. The ship will leave Aker Philadelphia Shipyard and join its sister ships in transporting petroleum products on the West Coast. Aker Philadelphia has two other vessels currently under construction as part of its historical build program. Both are scheduled to be delivered through spring 2011.