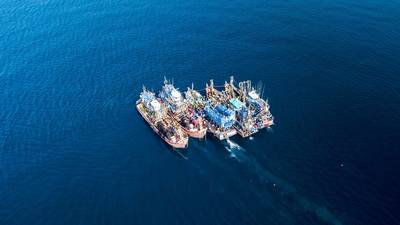 A lawmaker in the Philippines has reintroduced legislation to prevent maritime and airspace encroachment by Chinese vessels, by restricting them to designated sea lanes and air routes and prescribing jail time for captains or vessel owners.

The Philippines has complained repeatedly about Chinese activities in its 200 mile (322 km) exclusive economic zone (EEZ), including the sustained presence of hundreds of fishing boats it believes contain militia. It has argued those are not engaged in "innocent passage", as is permitted under international law.

The Philippines has long accused Chinese vessels of harassing and disrupting fishing activities, as part of Beijing's efforts to assert its claim to sovereignty over almost entire South China Sea.

"No Chinese or any vessel should be allowed in our waters without our approval unless for innocent passage in the designated archipelagic sea lanes," he said on Wednesday.

President Ferdinand Marcos Jr is pursuing strong ties with China but has been clear in promising to defend sovereign territory and stand up to any Chinese encroachment in the South China Sea.

China's embassy in Manila did not immediately respond to a request for comment.

The bill was approved by the previous lower house of Congress but failed to get Senate backing.

It states vessels or planes must pass as quickly as possible and cannot deviate more than 25 nautical miles from designated routes, or engage in fishing or resource extraction during passage. It also bars research activity in the areas unless approved by the Philippine government.

It calls for prison terms of up to two years or a fine of over $1 million or both on the captain, owners or operators of vessels or planes violating the rules.