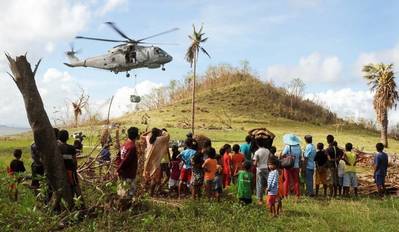 The Royal Navy’s amphibious aircraft carrier HMS Illustrious arrived in the Philippines on 25 November, 2013, after a short stop in Singapore to load up 500 tonnes of humanitarian aid under the direction of the UK Department for International Development (DFID).

Teams of personnel have been working 24-hours-a-day in her hangar to sort and pack the much needed supplies, ready for distribution ashore, and the flight deck has been operating constantly since the 23,000-tonne ship arrived.

Royal Navy Sea King and Merlin and British Army Lynx helicopters have been streaming to the islands around the coast of Panay every few minutes to deliver the supplies.

Together, they have completed 252 flying hours and 227 vertical replenishments (where the aircraft hovers over the flight deck to collect an underslung load without landing).

Alongside food aid and equipment distribution on numerous islands, there have been opportunities for soldiers, sailors and marines to get their hands dirty. Teams have been sent ashore on 6 islands to assist with such things as repairing generators, buildings and fishing boats and debris clearance.

Commander Nick Walker said: after 5 days of intensive air operations, yesterday was the most active so far. I don’t think there has been a busier day on the flight deck since Illustrious converted to a helicopter carrier in 2010. Although the majority of the flying occurs in daylight hours, supporting the air effort with aircraft maintenance, deck and load preparations and planning and briefing is a 24-hour operation. I am immensely proud of all those involved and what they have enabled the Air Group to achieve for the people of the Philippines."