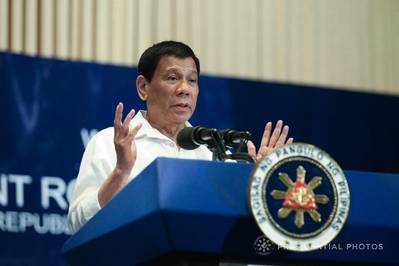 Philippine President Rodrigo Duterte personally made a decision to let China conduct scientific research off the Philippines’ Pacific coast, his spokesman said on Monday, despite concern among critics about threats to maritime sovereignty.

Presidential spokesman Harry Roque said that as chief architect of foreign policy, Duterte allowed China to work with the University of the Philippines in Benham Rise, an area roughly the size of Greece and believed by some scientists to be rich in biodiversity and tuna.
The United Nations declared Benham Rise, off the Pacific coast, part of the continental shelf of the Philippines in 2012. Manila last year renamed it the “Philippine Rise”.
Though China does not lay claim to the area, the lingering presence of its vessels for several months in late 2016 triggered concern about its intentions.
The Philippines granting of the permission to China was not announced and was revealed a few days ago by a lawmaker who has been fiercely critical of Duterte’s close ties with Beijing.
The Philippines and China have a long history of maritime squabbles over sovereignty in the South China Sea, but there has been no disagreement about waters off Manila’s Pacific coast.
Roque said anyone opposed to the joint research project should go to Congress and raise the issue there.
“If this is not a wise move of the president, then a law could be enacted to prohibit it,” he said.
The Philippines would grant permission to any other country that might show interest in conducting maritime research at Benham Rise, he added.
(Reporting by Manuel Mogato; Editing by Martin Petty, Robert Birsel)