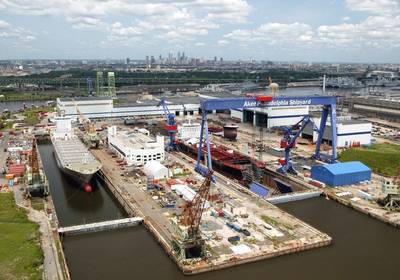 The U.S. commercial shipyard constructing vessels for operation in the U.S. Jones Act market, Philly Shipyard announced that it is to appoint a Chief Financial Officer (CFO) with “deep government contracts experience”.

Brian Leathers will assume the CFO position immediately following the second quarter 2019 meeting of the company’s board on July 15, 2019.

Leathers will replace Jan Ivar Nielsen, who is resigning from his position as the company’s CFO to pursue another executive role within the Aker group.

Leathers has served as the company’s Strategy and Compliance Officer for the past six months, reporting to Nielsen. Prior to that role, Leathers was engaged by the company as a consultant with respect to its strategic efforts to position the shipyard as one that can perform both government and commercial work. As the new CFO, Leathers will report directly to CEO Steinar Nerbovik.

Leathers previously worked as Senior Vice President and CFO at Austal USA, a prime government contractor for the design, construction and support of high-speed aluminum ships for the U.S. Navy.

During his tenure, Austal USA grew from fewer than 1,000 employees to more than 4,000 employees, converted from a commercial shipyard into a government contractor and was awarded over $6 billion in Navy work.

"I am delighted to welcome Brian to the senior management team as our new CFO," said Steinar Nerbovik. "His strong performance here at Philly Shipyard and his significant experience with Navy and other government shipbuilding programs shows he is well-suited for the role as we transition our shipyard into a compliant government contractor."