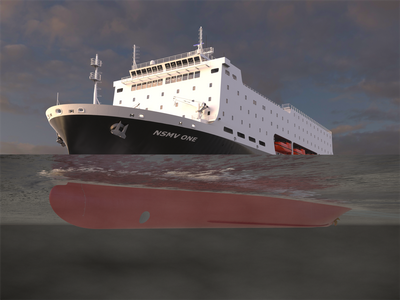 Operations and Shipping Investments
At the end of the fourth quarter of 2018, Philly Shipyard was building the second of two containerships for Matson (Hulls 029-030). Hull 029 (named Daniel K. Inouye) was delivered to Matson on 31 October 2018. This vessel is the largest containership ever built in the United States. Hull 030 was launched on 13 November 2018. The planned delivery date for Hull 030 remains Q1 2019.

While Philly Shipyard continues to actively seek new orders and the capital necessary to build vessels after Hull 030, it continues to adjust its operations and workforce in line with its current order backlog. These adjustments include idling additional parts of its facilities and laying off more of its employees. Currently, the only shipbuilding activity is in one of the two graving docks at the shipyard; all other production facilities are idle. Today, Philly Shipyard’s workforce (including direct employees and subcontracted personnel) totals slightly more than 400 people, down from approximately 1,200 people at the beginning of 2018.

As of February 6, Hull 030 is the last vessel in PSI’s order book. Securing contracts for new vessels is the key to unlocking Philly Shipyard’s potential for sustained operations and profitability. Due to the under-recovery of overhead costs (i.e., overhead costs incurred and not allocated to projects), Philly Shipyard expects it will suffer significant losses in 2019, even if the shipyard receives orders for new vessels.

In the near term, Philly Shipyard’s main focus is the pursuit of the opportunity to build National Security MultiMission Vessels (NSMV). The NSMV program seeks to replace up to five of the U.S. state maritime academy training ships. The U.S. Maritime Administration (MARAD) released a request for proposal (RFP) for a vessel construction manager (VCM) for the NSMV program. The VCM contract is expected to be awarded early this year. The VCM will then enter into a contract with a U.S. shipyard to build the vessels. The shipyard contract is expected to be awarded within Q2 2019. MARAD has received USD 300 million in federal funding for the first vessel. Delivery of the first vessel is targeted for the end of Q4 2021.

In addition, Philly Shipyard is in discussions related to several other potential new construction projects for U.S.-built vessels. Philly Shipyard is expanding its search for new opportunities throughout the marine industry. Philly Shipyard is also exploring potential partnerships that can create a stronger entity to secure new work into the shipyard and create value for the Company and its shareholders.

Additionally, Philly Shipyard is aggressively pursuing several possibilities for short-term work to have some activity in the shipyard in 2019 before a production start of a new shipbuilding project. In particular, Philly Shipyard is pursuing opportunities for steel work and repair jobs to utilize idle capacity in its fabrication shops and dry-docks.