Costa Concordia to be Piggy-backed Away 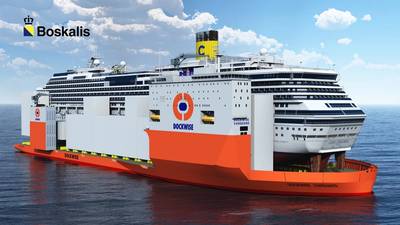 Dockwise, a wholly-owned subsidiary of Royal Boskalis Westminster N.V. (Boskalis) has been awarded the contract to load and transport the lifted 'Costa Concordia' wreck from Isola del Giglio onboard the 'Dockwise Vanguard'. The contract was awarded by Costa Crociere S.p.A.

In a unique operation the Costa Concordia can be loaded as a whole onto the Dockwise Vanguard and safely transported to a location where she can be scrapped. The client has yet to make a decision in agreement with the local authorities on the final destination. Alternatives under review include scrapping the vessel in Italy.

As part of the contract, certain modifications will be made to the Dockwise Vanguard to accommodate the loading of the Concordia in her current state. The operation is planned to take place around mid-2014 and contract value of the work scope as described amounts to approximately USD 30 million.

The Dockwise Vanguard is the world's largest semi-submersible ship uniquely positioned to lift and transport extremely heavy cargoes in a dry and safe manner. The ship was initially designed to transport offshore oil and gas structures, but can also carry other vessels and act as an offshore dry dock facility.

Once the Dockwise Vanguard is semi-submersed, the floating Costa Concordia will be brought in position above the deck and as the transport ship empties its ballast tanks, the entire ship including the wrecked cruise liner will be brought above the water line allowing transport of the wreck for breaking up elsewhere.