The Pirate Surge That Never Was 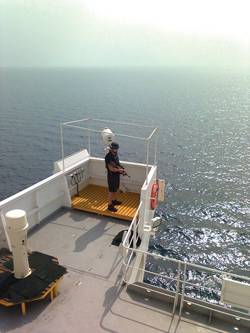 In September 2011, as the monsoon began to blow itself out, there were grave warnings from a number of sources and analysts that the shipping industry could expect to see a significant surge in pirate activity as conditions in the Arabian Sea and Indian Ocean became more favorable. Captain Keith Blount, chief of staff with EU NAVFOR, told the press1, “I think we are going to see a surge in piracy because we always have done at  this time when the southwest monsoon abates and the seas become flatter.”

But as conditions cleared, the anticipated increase in pirate activity failed to materialize, to the surprise of many in the industry. This was all the more remarkable given the business model of Somali pirates, which demands that they hijack high value targets which can be ransomed for huge sums which are then used to pay off the investors who supply the equipment used by the pirates, their food and that of their hostages and so on. Without a reasonable turnover of hijacked vessels, pirates begin to run up big bills in their home ports and those cut into their profit margins. Pirates towards the end of 2011 were very much on the back foot, and successful hijackings were suddenly few and far between.

The data speaks for itself. 2010 saw 210 incidents attributed to Somali pirates, according to figures supplied by the International Maritime Bureau (IMB)2. In 2011, this figure increased to 231 but, while 2010 saw 49 vessels hijacked, last year there were only 26 successful hijackings.

While October 20113 saw some 26 attacks by Somali pirates on merchant and fishing vessels, only one of those attacks resulted in a ‘win’ for the pirates; the MT Liquid Velvet, a Greek-owned chemical tanker which was hijacked on October 31st as she transited from Suez to India. In January 2012, NATO reported that the Liquid Velvet had been turned in to a pirate mothership and had left Somalia, on the hunt for other prey. Fortunately, naval forces disrupted this plan but the vessel remains in the hands of its Somali hijackers.

While 26 attempted attacks is certainly a large number for one month, the fact that only one vessel was successfully hijacked is significant and signaled that the tide was perhaps beginning to turn on the pirates. Until the fourth quarter of 2011, pirates had enjoyed continued success in the Arabian Sea and Gulf of Aden (GoA), despite the presence of EU NAVFOR Operation Atalanta and NATO Operation Ocean Shield warships. The ‘good guys’ have an area approximately the size of Europe to patrol, which has always made early interdiction of pirates a difficult task, particularly given the amount of small boat traffic in the GoA.

The industry continued to hold its collective breath, waiting for more attacks and hijackings as the monsoon abated. However, October proved to be the pirates’ most active month that quarter, as November would reinforce. EU NAVFOR initially listed 12 pirate attacks for the month, later downsizing this to just 11 attacks, of which only one resulted in a successful hijacking. Again, the figures confounded received wisdom. From the pirates’ perspective, December was to prove little better, with EU NAVFOR reporting just three pirate attacks for the month, although one of those was indeed a ‘hit’ for the pirates, as the MT Enrico Ievoli enjoyed the dubious honour of becoming the last vessel to be hijacked in 2011, falling into pirate hands on December 27th approximately 215 nautical miles East by Northeast of Salalah, less than 40nm from the Oman coast.

Suddenly, 2011 had become the year the pirates failed and the expected surge spluttered to a halt. The big question is, why?

A number of factors have been cited as possible causes in the drop-off of pirate activity. Kenya’s military forces have been present in Somalia for some time, fighting Al Shabaab insurgents across the country and this has been pointed to by some in the media as being partly responsible for the lack of pirate surge. Activity on the ground by the authorities in Puntland, Somalia’s semi-autonomous state, have also affected pirates. Recent arrests, including one which saw 150 pirates scooped up in one raid4, have no doubt caused pirates some discomfort and one cannot discount the persistent presence of NATO and EU NAVFOR patrols in the area as damaging pirate operations. They regularly interdict and disrupt pirate mother ships and dhows, and this too must affect pirate success figures.

Examination of the data, however, highlights another factor which has mitigated pirate attacks: the presence of armed guards onboard merchant vessels. Whilst most official sources view them with ambivalence, there is absolutely no doubt that in the fourth quarter of 2011, they played a significant role in defeating piracy.

Of the 26 pirate attacks conducted in October 2011, a staggering 16 of them were repelled by armed guards3. In November, EU NAVFOR’s updated figures stated that 11 attacks took place. Five of those vessels had an armed Vessel Protection Team (VPT) onboard. It should be noted that whilst the MT Liquid Velvet, successfully hijacked on October 31st, had a ‘security advisor’ onboard, he was unarmed. Sadly, the MT Enrico Ievoli, taken on December 27th, had neither a VPT nor even a citadel for its crew to retreat to in times of danger.

While the figures make interesting reading, further evidence of the success of armed VPTs can be found on the ground in Somalia. Robert Young Pelton is the Publisher of SomaliaReport.com, one of the best news sources in-country and a vital resource for anyone interested in breaking Somali news stories and pirate activity. Who better to ask why piracy was at such a low level towards the end of 2011?

“A very simple answer. Armed security on ships. When we analyze every single regional (HOA) contact between the maritime industry and pirates, over 90% of the reasons why pirates broke off attacks, hovered then left or made initial attempts to board. The use of warning shots, shots to the skiff engines and the use of visible force prevented a successful attack,” said Pelton.

Somalia Report has widely covered moves by officials in Puntland to prevent piracy, as Pelton explained:

“There is an increasing pressure on pirates from the government of Puntland. The only functional ground based activity that I have seen is the Somalia Marine Force, local anti-piracy militias in Bargal and arrests made by Puntland police. Puntland has gone from being blamed for supporting piracy to being the most aggressive land based force working to eliminate it. It’s a pity that international groups who are also working to defeat piracy do not support and co-ordinate with these national entities. Watch for dramatic events from the new Somalia Marine Force. They will bring around 1000 trained locals, air assets, naval assets and a very sophisticated approach to the elimination of piracy in Puntland.”

With more shipping firms employing private security companies to guard their vessels, it seems clear that the methods used by Somali pirates will have to evolve. Robert Young Pelton agrees, “[We will see] More audacious attacks like the near land or at anchor attacks, land based attacks to grab western victims. It is an entrepreneurial model with low cost of entry, multiple attacks to try new tactics and little risk. So I fully expect pirate groups to surprise us with each attack in 2012 rather than maintain the status quo, which as Somalia Report predicted last year, is now dead.”

As the UK government continues to ratify the procedures needed to vet maritime security companies so that UK-flagged vessels can employ armed VPTs5, it seems that they are becoming the de facto defence against Somali pirates, and insurers agree. In January, Fairplay magazine6 suggested that premium and freight rates could fall if the lack of pirate success continued. They quoted shipping lawyer, Doug Burnett, of American law firm Squire & Dempsey, who commented that for: “ship-owners who do not have armed guards and follow best practices, I do not see insurance rates dropping much.”

2012’s pirate season has already kicked off with one reported casualty thus far – an Iranian chemical tanker – although actual details of this hijacking remain scarce. With more vessels carrying armed security details and the continued use of citadels and Best Management Practice, this year could be the most interesting yet in the fight against an illegal industry which is estimated to cost the global economy as much as $8 billion each year7.

David Rider is Neptune Maritime Security’s Communications Officer, and has 20 years’ experience in journalism and communications. He can be contacted by email at [email protected]

As published in the February 2012 edition of Maritime Reporter & Engineering News (www.digitalwavepublishing.com/pubs/nwm/maritimereporter/201202/)