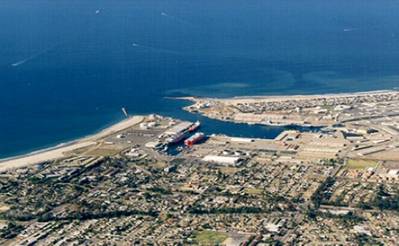 The Port informs that it has conducted its first operational and safety vessel test of its recently installed Auxiliary Maritime Power (AMP) system. Port crews were on hand to view this first vessel ‘plug in’ by Hamburg Sud’s 'M/V Cap Pasley', carrying fresh fruit for Chiquita Brands of Charlotte, North Carolina.

The Port of Hueneme explains that the initial test of ‘plugging in’ a vessel is critical to assessing performance of this new and very high voltage shore power system. It is also vital to ensuring all trained units including ILWU and ship operators become comfortable with operating the gear. The process tests the vessel’s ability to synchronize with and connect to the Port’s grid-based electrical system.

The Port of Hueneme’s project “represents a giant leap forward for the Port and the community” said Port CEO and Director Kristin Decas. “Over the lifetime of this project (30 years), annual emissions from refrigerated cargo vessels also known as “reefer vessels” will be significantly reduced”. Anticipated reductions include a 92% reduction in PM, 98% reduction in NOx, and a 55% reduction in greenhouse gasses.

This initial test was a success and a second major milestone for the Port’s Shore Power system. The first milestone was the Port’s successful load bank test in December 2013 that demonstrated the system’s capability to provide a reliable, steady source of shore side power for ships at berth.

The Port intends to host a formal ribbon cutting ceremony on April 23, 2014 when the additional newly retrofitted vessels plug in for the first time to the Port’s other two shore side power units. The ceremony will be part of the celebration of Earth Week at Port of Hueneme.