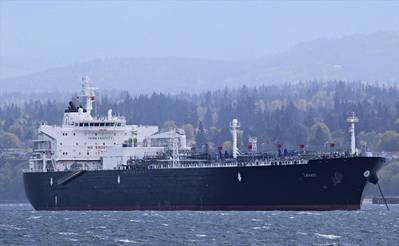 A liquefied petroleum gas (LPG) carrier struck a Washington State wharf in 2019 because the pilot approached with excessive speed and at too steep an angle, resulting from poor bridge resource management by the Puget Sound pilot and the ship’s bridge team, the National Transportation Safety Board said Thursday.

The 741.5-foot partially loaded tanker Levant struck the Petrogas Ferndale Wharf in Puget Sound, near Ferndale, Wash., on December 15, 2019, causing more than $6.75 million in damage to the wharf and $1.5 million in damage to the vessel. The wharf’s south mooring dolphin, and the catwalk connecting it to the wharf, were destroyed and the Levant’s forward ballast tank was penetrated and flooded. There were no injuries or environmental damage.

The Marshall Islands-flagged Levant, owned by Avance Gas LTD and operated by Exmar Ship Management NV, successfully docked at the wharf several days earlier. The master, concerned about maintaining a safe under-keel clearance due to a falling tide, decided to stop loading their cargo of propane and butane and take the ship to deeper water for the night. For the shift to the anchorage, 0.7 miles away, a pilot was brought on board. The pilot then stayed for the next day’s early morning approach back to the wharf when tidal conditions improved.

Investigators found a “condition of complacency” likely existed on the bridge because of the short distance back to the wharf. The master-pilot exchange of information was not as detailed as during the earlier briefing before leaving the wharf. The pilot and the master were likely distracted by a two-minute, non-pertinent conversation they had about three minutes before contact. 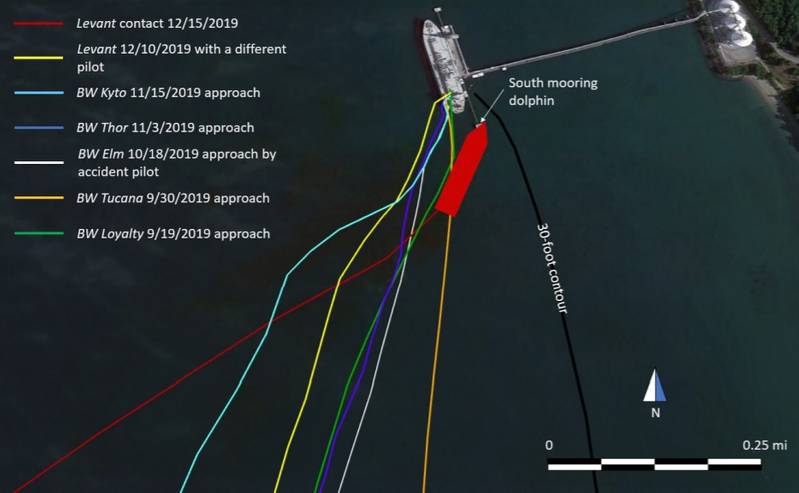 AIS tracks of all liquid petroleum gas carrier approaches to the Petrogas Wharf from September 19 to December 15, 2019. Included is the initial approach of the Levant to the wharf on December 10 (yellow line), and the accident pilot’s last approach to the wharf on October 18 (white line). Levant scale approximate; vessel at pier was not present at the time of either approach. (Image: NTSB, background source: Google Earth)

In Marine Accident Brief 21/02, the NTSB said the vigilance of a pilot and bridge team should be increased, not decreased, with a ship’s proximity to dangers and obstructions. Regardless of the distance or duration of a transit, the bridge resource management fundamentals of planning, communication, use of all available resources and information, monitoring and management of distractions are essential to operations with a pilot on board.