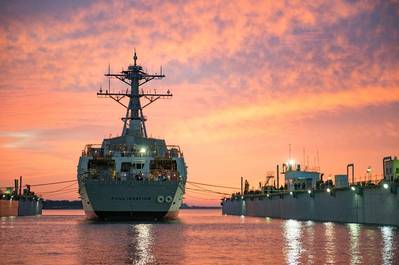 Last week, the Broward County Commission voted unanimously to waive dockage charges for the ship’s call and provide a cruise terminal for the Commissioning Committee to hold weeklong events.

“We are honored that the U.S. Navy recognizes that Port Everglades can meet their unique needs,” said Broward County Mayor Mark Bogen. “For 29 years, Fleet Week Port Everglades was produced as a signature annual event for South Florida, as well as the Navy, Marines, Coast Guard, and for the nation, bringing tens of thousands of visiting military personnel and guests to our community. We are proud that our community will host this important ceremonial event in the life of a new Naval warship.”

Broward County Transit will also waive bus fares for the military crew of the ship during their call in Port Everglades.

“The commissioning of U.S. Navy vessels at ports other than Navy homeports is not regularly done, and the fact that Broward County and Port Everglades has been chosen to host a U.S. Navy ship commissioning for the sixth time in the past 32 years is an honor,” Glenn added.

Named after the 59th Secretary of the Navy (1967-69) during President Lyndon Johnson’s Administration and a distinguished World War II veteran, the USS Paul Ignatius (DDG-117) is the Navy’s 67th Arleigh Burke-class destroyer and will debut the latest technology and weapon systems with the most advanced combat capabilities.

At 513 feet long and 66 feet wide, with a displacement of approximately 9,200 tons, her propulsion system will drive it to speeds in excess of 30 knots, and she will accommodate a crew of 304 Sailors.