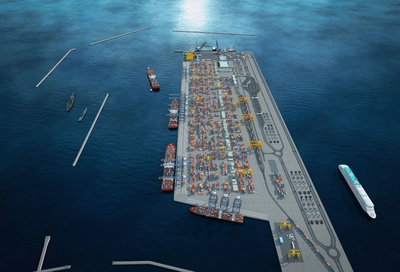 The Port of Gdynia Authority (PGA) in Poland has recently launched a formal procedure to select a private partner for the construction of the outer port in the Port of Gdynia.

The project is a strategic investment of the Port of Gdynia Authority S.A., and is enlisted in the Polish government’s Seaports Development Program.

The outer port development project, which is being prepared as a public-private partnership, consists of the construction of a new deep-water container terminal with an annual transshipment capacity of 2.5 million TEU. The new facility will enable Baltmax size container ships to call the Port of Gdynia, including vessels larger than those currently in use, so even up to 430 meters in length.

The main part of the project is to build a new pier in the Port of Gdynia. The total area of the new part of the port will be around 150 hectares.

Adam Meller President of the Port of Gdynia Authority S.A. said: "The steady increase in transhipments and good forecasts for the coming years is a strong argument for developing the Port of Gdynia. Over the last 3 years, investments made or commenced in the Port of Gdynia amount to over PLN 1 billion [$274 million]. The Outer Port is a strategic investment, which is under construction. We want to continue the vision of Eng. Tadeusz Wenda and Eugeniusz Kwiatkowski, so that the Port of Gdynia can be a generator of economic development of the country for the next decades"

"The private partner must be a world-class operator that will be able to attract cargo trade to the Port of Gdynia," said Maciej Ziomek, Associate Partner at EY Transaction Advisory Services Transport & Infrastructure Sectors Leader.

"In the case of such investments, cooperation between the Port of Gdynia Authority S.A., whose role is to create appropriate conditions for road and rail access to the port, and the private partner ensuring the success of the entire project, is crucial," he said.

According to the port authority, the public-private partnership formula allows taking advantage of the capital, know-how, and experience of the private sector in financing public services and investments. On the other hand, the authority said, public entity, such as Port of Gdynia Authority in this case, will share its knowledge and experience within the administrative and organizational issues of the project, which are specific to a particular country.

PGA will also provide research data and reports and will be responsible for building the new breakwaters system, which will protect not only the new pier of the Outer Port, but also for the entire Port of Gdynia, it said.

According to the “public-private partnership development policy” adopted by the Polish Government, the Port of Gdynia Authority, intends to carry out its strategic investment increasing the port’s cargo handling potential and boosting its competitive position in the Baltic Sea.

Parallelly to the Outer Port project, PGA will develop the project related to the new breakwaters of the Port of Gdynia. In October 2020, creation of the breakwaters was included in the special act, as an investment, that will help prevent the country’s economy from the impact of the covid19 pandemic.

Funds of 650 million euros are provided for the PGA, which means PGA will be able to ensure the necessary access infrastructure for the Outer Port, PGA said.

The total outlay of the project is estimated at ca 900 million Euro. The project is scheduled for completion by 2028.

China's state planner, the National Development and Reform Commission (NDRC), said on Monday it and the market regulator…