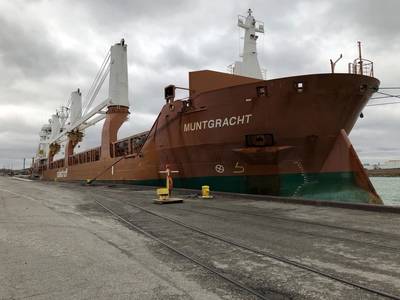 The first ocean-going vessel of 2020 arrived Monday at the Port of Indiana-Burns Harbor, thereby commencing this year's international shipping season at the Great Lakes port.

Port officials welcomed the M/V Muntgracht, a 466-foot general cargo carrier, after her five-day voyage through the St. Lawrence Seaway to the deepwater port on Lake Michigan. Due to the current global pandemic precautions, the ceremonial Steel Stein, a long-running tradition at the port, was canceled this year.

“The arrival of the first international ship of the year is always an exciting time as it signifies the prosperity the vessels help deliver to our region,” said Port Director Ian Hirt. “While we can’t celebrate in our traditional way, we are grateful for the commitment of our international partners to help deliver important cargo and products to global markets.”

Nearly 1,650 tons of wind turbine hubs and nacelles shipped from Bilbao, Spain will be unloaded from the M/V Muntgracht by port stevedore Federal Marine Terminals, the premier handler of break bulk cargoes on the Great Lakes. Upon completion in Burns Harbor, the Netherlands-flagged M/V Muntgracht will travel to Thunder Bay Port in Canada to load the next shipment, which it will take to Europe.

The annual tradition to present the captain of the ship with a Steel Stein, which symbolizes Northwest Indiana’s role as “steel capital of North America”, was canceled this year due to COVID-19 precautions. Instead, Captain Folkert Pans, his crew of 16 sailors and port officials exchanged friendly waves, safeguarding the welfare of all personnel.

Hirt expects approximately 75 international vessels this year, a significant increase over last year and anticipates most of the additional shipments to be energy-related cargo.

“Many of the components for the natural gas-powered electrical plants and the wind turbines are made internationally,” said Hirt. “As the Midwest pivots from coal to natural gas and renewable energy sources, it makes sense for our port to handle the large-dimensional cargo and transload to the nearby final destination.”

Maritime operations at the Port of Indiana-Burns Harbor generate nearly $4.9 billion per year in economic activity and support more than 39,000 total jobs. The port handled nearly 2.6 million tons of cargo in 2019, a 6% decrease from 2018, due in part to high water levels and trade uncertainty.

The St. Lawrence Seaway opened its locks to ocean vessels on April 1, approximately a 10-day delay in an effort alleviate water levels on Lake Ontario.

“Every navigation season brings opportunities and challenges and the 2020 season will be no different, said Craig H. Middlebrook, Deputy Administrator of the U.S. Saint Lawrence Seaway Development Corporation. “While the opportunities and challenges change each year, what remains constant are the safety, reliability, efficiency and environmental performance advantages of waterborne transportation.”