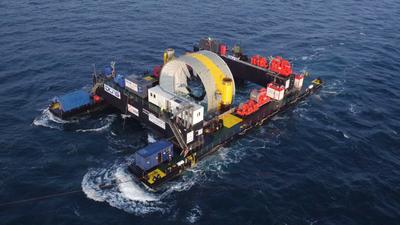 A second turbine bound for EDF’s Paimpol-Bréhat tidal array was deployed by DCNS' OpenHydro in May (Photo: DCNS)

Tidal power is moving beyond the prototype stage for state-backed French naval shipbuilder DCNS, which is targeting a billion euros in sales from the technology in the next decade.
DCNS, which is 35 percent owned by defence group Thales and 64 percent by the French state, builds warships and submarines but aims to sell its first commercial tidal power system in four years and wants to get up to 25 percent of its sales from renewable marine energies by 2025.
The firm bought Ireland's OpenHydro, which generates power from turbines installed on the sea bed, in 2013 and is working on pilot projects in France, Canada, Scotland and Northern Ireland. It has installed two 16-metre tidal turbines in Paimpol-Brehat, Brittany, for utility EDF which will be connected to the grid this summer.
"We have reached a turning point in tidal turbines, we are entering the pre-industrial phase," DCNS head of energy and marine infrastructures Thierry Kalanquin told Reuters.
For now, revenue from the tidal current business is still close to zero, but DCNS expects to start selling its first turbines in 2017-18 for pilot projects and from 2020 it expects to sell its first commercial tidal turbine farms.
"We hope to get one billion euros in sales in tidal turbines in ten years," he said, adding that he sees a big market in Canada, Britain, the U.S. and Asia.
DCNS - which had 2015 net profit of 58 million euros on turnover of 3 billion euros - has invested about 150 million euros in buying Open Hydro and funding further research.
Many players in the fledgling industry are hydropower specialists, like Swiss Andritz and General Electric , or involved in naval construction, like DCNS.
Turning the Tide
But there are also start-ups, like France's Sabella, which specialises in smaller turbines for isolated sites, and Britain's Atlantis Resources, which became the first listed tidal turbine specialist in 2014.
Atlantis' market value has fallen by nearly 50 percent since then to around 60 million pounds ($89 million), illustrating the challenges the industry faces to become viable.
Kalanquin said that globally potential sites with a combined capacity about 100 gigawatts (GW) had been identified, but only about 25 GW of this can be commercially operated today, which represents a global market worth around 75 billion euros.
"We aim to win a 20 to 25 percent market share," he added.
France has a long coastline, but only one major site on the western tip of Normandy, with a 3 to 4 GW potential, of which about 1.5 GW could be commercially operated at the moment.
Kalanquin called on the French government to speed up planned tenders for tidal current turbine farms, with commercially viable scale of more than 100 MW.
DCNS will install 7 pilot turbines in Raz Blanchard for EDF in 2018. General Electric-Alstom was also selected to install turbines there for Engie.