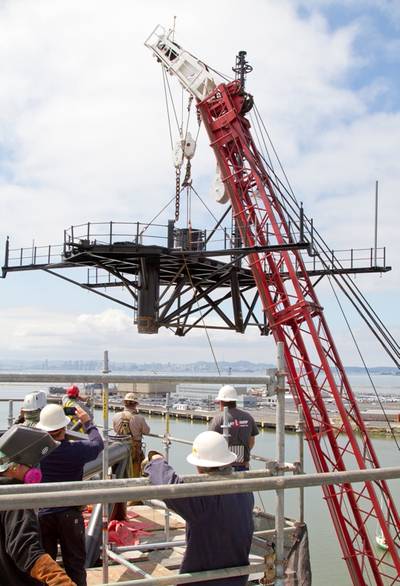 USS IOWA Takes on Iowa Coins, Regains its Mast, Prepares for its Final Journey; The Battleship of Presidents will open as an interactive naval museum in Los Angeles.

The time-honored tradition of adding coins to the mast of a ship for good luck took place as two Iowans stood atop a 205-foot-tall platform and dropped Iowa state quarters into the mast of the USS IOWA as it hung from a barge crane. Former Iowa legislator Jeff Lamberti of Ankeny and Becky Beach of Des Moines released a handful of coins into the mast shortly before eight welders reattached it to the historic battleship. Lamberti and Beach have played key roles in the effort to save the USS IOWA and transform the historic ship into an interactive naval museum.

The mast, which is 50 feet tall and weighs 52,000 pounds, had to be reattached because the Navy had removed it more than 10 years ago so the ship would fit under bridges along its tow route. The Pacific Battleship Center, the nonprofit group bringing the USS IOWA back to life, has been refurbishing the ship to prepare for its move to the Port of Los Angeles Berth 87. This process includes the re-stepping of the original mast, a time-honored ritual in the maritime world that is thought to have originated in ancient Rome.

One theory is that the Romans placed coins under the mast so the crew would have the funds needed to pay to cross the River Styx to the afterlife if the ship were sunk. Another theory holds that the insertion of coins into ships and buildings was designed to thank the gods for successful construction and to request divine protection in the future.

Iowa Gov. Terry Branstad, who signed a bill providing $3 million for the USS IOWA restoration and museum, said he is pleased with the progress that’s been made on the project. “The re-stepping of the mast signals the final phase of efforts to make the USS IOWA a permanent fixture in American history,” Branstad added. “People like Becky Beach and Jeff Lamberti have worked tirelessly for this moment and having them represent the state of Iowa during this ceremony was very appropriate.”

With the mast back in place, the USS IOWA is one step closer to embarking on its final voyage to the Port of Los Angeles, where it will have a public grand opening on July 7. USS Iowa veterans will hold a reunion at the ship starting July 2. On July 4, government officials and invited guests will gather aboard the USS IOWA to celebrate Independence Day and the commissioning of the Pacific Battleship Center.
The battleship will leave Richmond for Los Angeles on May 20. A parade of ships will escort the USS IOWA through the San Francisco Bay and under the Golden Gate Bridge.
With its mast reattached, the battleship towers about 175 feet above water. It is expected to easily clear the Golden Gate Bridge, which is 220 feet above mean high water. The journey will become more challenging when the ship gets to the Port of Los Angeles, where the Vincent Thomas bridge is 185 feet above water.

Pacific Battleship Center will allow the top 200 Plankowner members, individuals who have donated to the effort to turn the USS IOWA into a museum, to ride the ship when it is transported through the Los Angeles Main Channel on June 9. Opportunities to contribute are available at www.pacificbattleship.com/page/plank_owners through May 20. The USS IOWA served for more than 60 years, including World War II, the Korean War and the Cold War. It’s known as the Battleship of Presidents because it hosted Presidents Franklin D. Roosevelt, Ronald Reagan and George H.W. Bush.

On Sept. 6, 2011, the U.S. Navy awarded the USS IOWA to the Pacific Battleship Center. The action was possible under the Navy’s ship donation program and reflects the culmination of years of work by many dedicated volunteers. USS IOWA is the last battleship in the world to be saved and turned into a permanent museum.

Schedule of Events for the USS IOWA