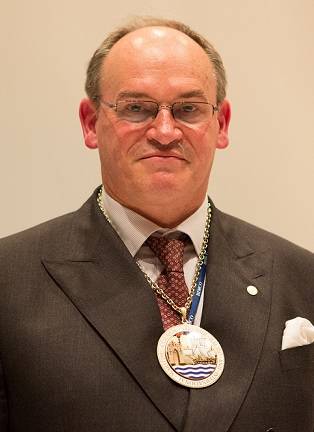 The new president of BIMCO, John Denholm, has identified environmental pressures facing the shipping industry as some of its most significant current challenges as he embarks upon his two year term. Speaking in Paris, as he took over the presidency of the shipping organization from Yudhishthir Khatau, Mr. Denholm said, “environment, with the many diverse challenges it raises, will be his theme for his period in office, with emissions and ballast water issues high on his agenda for action.”

The third BIMCO President from the Glasgow family shipping company, Mr. Denholm said that the challenges currently being faced by the industry are “more difficult and more complex” than those of the past. While an oversupply of tonnage might be nothing new, the consequences of this, he said, were overshadowed by owners buying energy-efficient designs which will undoubtedly delay the return to a more balanced market.

The situation was not improved by the growing regulatory burden, which, he suggested, was driven by a “huge, politically inspired environmental agenda” which would impose significant costs on the industry at a time when it could least afford them.

Emphasising that the shipping industry remained the most environmentally friendly mode of industrial transport, Mr. Denholm suggested that the pressures the industry was under to reduce its impact on sea and air amounted to an “environmental siege”. And while it was impossible to stop environmental legislation, BIMCO, he said, was in a good position to ensure that it was “workable and affordable” and was implemented on a global basis, with the International Maritime Organization preeminent.

The President said that the requirement for low sulphur fuels in both emission control areas and eventually on the high seas will be a “game changer” for many owners, who will be forced to burn low sulphur fuel or LNG, in the absence of some spectacular advance in exhaust scrubbing technology. The availability of distillate fuel in sufficient quantities remains far from sure, and BIMCO, he emphasized, will be using its influence to have the implementation of the legislation deferred.

A further major challenge for owners, said Mr. Denholm, is the IMO Ballast Water Convention, where owners are at “huge risk” of investing in equipment that subsequently may not meet approval. BIMCO will work hard at IMO to see the timetable for this regulation loosened. On carbon emissions, the industry had done what it can to reduce these through slow steaming and technical development and BIMCO continues to argue that there is nothing to be gained by imposing artificial mechanisms to achieve targets. These environmental issues, he emphasized, required solutions and he believed that BIMCO “could win both the practical and moral arguments”.

The incoming President said that the organization would continue to ensure that the fight against piracy would remain a high priority as the problem had not gone away.

The BIMCO events in Paris also included the 100th anniversary of the BIMCO Documentary Committee and the President paid a tribute to all those individuals down the years who had contributed to the development of standard documents and clauses and maintained BIMCO’s leadership role in this important field.

The BIMCO AGM also elected as President Designate Philippe Louis-Dreyfus, President of his family shipping company Louis Dreyfus Armateurs. Members also elected as Vice-Presidents of BIMCO Sadan Kaptanoglu of Turkey and Young Min Kim of South Korea. Ms. Kaptanoglu is the first female to become a vice-president in the organisation. Tributes were also paid to the Secretary-General of BIMCO Mr. Torben Skaanild, who will be retiring from the organization in the autumn.

Earlier at the BIMCO AGM 2013, members were given an exclusive presentation by the Deputy Executive Director of the International Energy Agency Ambassador Richard Jones.

The incoming President of BIMCO, John Denholm is the Chairman of the old established Scottish shipping company J&J Denholm, and is the third member of his family to be President of BIMCO. His great-grandfather, also called John, was a founder member of BIMCO and President in 1927, while the President’s father Sir Ian Denholm, was BIMCO President from 1991 to 1993. A much diversified organization, the Denholm Group today is heavily involved in maritime and energy services.