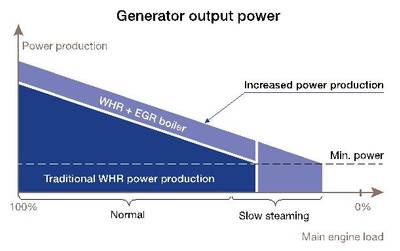 Exhaust Gas Recirculation (EGR) has firmly shown its ability to comply with Tier III NOx limits, which will enter into force in January 2016. Developed by MAN Diesel & Turbo, the EGR process already relies on Alfa Laval’s PureNOx, which provides the vital cleaning of the scrubber water. Now Alfa Laval is cooperating with MAN Diesel & Turbo to implement an EGR boiler, which could potentially add major energy benefits to the secure emission compliance.

Over 1000 hours of EGR operation have now been achieved aboard the Maersk Cardiff, a container newbuild from A.P. Moller-Maersk with a two-stroke MAN B&W 6S80ME-C9 engine. Having demonstrated reliable compliance with Tier III NOx legislation, as well as the potential for fuel savings in Tier II operation, the vessel’s EGR installation will soon be expanded with another remarkable technology: a pressurized EGR boiler from Alfa Laval.

“We have shown that EGR works smoothly and that it complies fully with the NOx limits appearing in 2016,” said Michael Witt, Head of Retrofit Development R&D at MAN Diesel & Turbo. “Together with Alfa Laval and A.P. Moller-Maersk, we are now looking beyond compliance to optimize the system and to utilize opportunities for energy savings.”

According to Anders Busk Nielsen, Project Manager at Alfa Laval’s Product Centre Boilers, one such opportunity is waste heat recovery. “EGR is a fantastic technology that is already well served by Alfa Laval’s separation know-how,” Nielsen said. “Now we are adding our expertise in waste heat recovery, by placing a pressurized exhaust gas boiler in the EGR circuit. If successful, it could add substantial energy savings to NOx emission compliance.”

Reclaiming the diverted waste heat
The reasons for developing an EGR boiler are straightforward. In the EGR process, around 30% of the exhaust gas is directed back into the engine, which reduces the combustion temperature and thereby the production of NOx. This also reduces waste heat recovery by 30%, since only 70% of the gas reaches the traditional exhaust gas boiler after the turbocharger. The remaining heat energy is dissipated in the EGR scrubbing process.

“The idea is to place an in-line boiler ahead of the EGR wet scrubber, before the scrubber jets cool the exhaust gas,” says Nielsen. “In this location, the boiler would have access to much higher temperatures and pressures than traditional exhaust gas boilers. That would allow a lighter and more compact boiler, which would be self-cleaning due to the high speed of flow.”

The heat would be recovered from the EGR circuit, and the availability of service steam would be unchanged from today. Moreover, as part of an integrated waste heat recovery system, the EGR boiler would enable a major increase in efficiency.

Standing up to extreme post-engine conditions
If the theory is simple, the challenges of constructing an EGR boiler are anything but. Today’s waste heat recovery involves temperatures of around 270°C, whereas temperatures before the EGR scrubber are twice that. In addition, the potential gas pressure in the EGR circuit is 2-4 bar(g), which necessitates a pressurized boiler casing.

The boiler Nielsen refers to is the new Aalborg XW-HPX pressurized EGR boiler, which is indeed lighter and more compact than any boiler with an equivalent output. Tentatively planned for launch in 2015, the boiler has moved off the drawing board and is now scheduled for test installation aboard the Maersk Cardiff late this summer.

“As a front-runner in the pursuit of green technologies, we are interested in testing the new EGR boiler aboard the Maersk Cardiff in order to hopefully demonstrate its promising potential for energy optimization in connection with the existing EGR installation,” says Ole Christensen, Senior Machinery Specialist at A.P. Moller-Maersk.

Up to 10% more steam power production
What exactly could the Aalborg XW-HPX achieve if successful? As a producer of service steam, it would provide the same saturated steam as a traditional exhaust gas boiler, though it would be more cost-efficient and easier to install.

Yet a great potential lies in integrating the Aalborg XW-HPX with existing waste heat recovery after the turbocharger, so that it shares a steam drum with the traditional exhaust gas boiler. With the output of the traditional boiler feeding into this drum, the Aalborg XW-HPX would produce extremely high-quality steam with a temperature of 400°C, bringing the waste heat recovery system to a much higher level of efficiency.

“Producing steam of this quality would greatly increase the performance of the steam turbine,” said Nielsen. “To give an indication, we’ve made calculations together with a leading steam turbine supplier. Those calculations put the power generation increase at 7.5-10%, depending on installation factors.”

On the Maersk Cardiff, for example, the additional generated power could be used to cool containers, thereby limiting the fuel consumed by the genset. But if fed into a shaft generator, it could instead increase the efficiency of the propulsion system, saving considerable fuel as a result.

Fuel savings through even slower steaming
Given the higher output, the increased efficiency in waste heat recovery would be interesting for any vessel like the Maersk Cardiff. Yet the Aalborg XW-HPX could prove its worth in still other ways. Most importantly, using it in an integrated boiler system would allow waste heat recovery to occur at lower main engine loads than today – creating the possibility for even slower steaming.

“The Maersk Cardiff has around 20 sister vessels, all with traditional waste heat recovery systems to compare with,” says Nielsen. “With the Aalborg XW-HPX, we should be able to both increase the efficiency and extend the operating hours of waste heat recovery, which would enable slower steaming and a massive fuel savings. That would be reflected not only in a lower fuel bill, but also in a CO2 reduction on top of the NOx abatement.”

“This is perhaps the most exciting prospect of Alfa Laval’s EGR boiler,” says Witt. “If the Aalborg XW-HPX can shift the operating balance for waste heat recovery by even a small percentage, the potential savings for ship owners and operators is enormous.”

“When you take exhaust gas at 450°C and spray water through it to cool it to 50°C, you need a lot of water and a high-capacity water cleaning unit,” explains Nielsen. “If the EGR boiler can first make use of most of that heat, there will be less heat left to enter the scrubber. Potentially, that could mean less water needed and an even smaller PureNOx.”

Ready for testing at sea
The theory behind the EGR boiler is solid, and land-based concept tests have already shown that a smaller installation can withstand the operating extremes. What remains to determine, however, is the boiler’s effect on the NOx abatement process. This is the reason for adding an Aalborg XW-HPX to the existing EGR installation on the Maersk Cardiff.

“Up to now, we have wanted to run the EGR system aboard the Maersk Cardiff without the influence of additional equipment,” says Witt. “Based on the good results seen there, however, we are confident of EGR’s ability to meet the NOx limits appearing in 2016. This means we can take the next step, installing the Aalborg XW-HPX as a part of energy-optimizing the NOx abatement technology.”

Supported by the Danish Energy-Technological Development and Demonstration Programme (EUDP), the project continues the close partnership between MAN Diesel & Turbo, Alfa Laval, A.P. Moller-Maersk and Aalborg University. “We are happy to extend the good cooperation that already exists aboard the Maersk Cardiff, and we look forward to being part of the EGR boiler test,” Christensen said. “The test will provide further knowledge and experience, and hence enable us to make informed decisions regarding the selection of NOx abatement technologies for coming Tier III projects.”

Testing of the Aalborg XW-HPX aboard the Maersk Cardiff will begin in the second half of 2014, and Nielsen foresees no interference with the EGR system. On the contrary, he anticipates that the EGR boiler will add to the overall attractiveness of EGR as a NOx abatement strategy.

“With an EGR boiler as part of the complete EGR system, it should be possible not only to reduce NOx by 80%, but also to reduce the emission of CO2, since there is the potential of substantially lower fuel consumption,” Nielsen said. “Nothing is proven yet, but this is absolutely what we expect.”