Book Review: Privateers of the Revolution 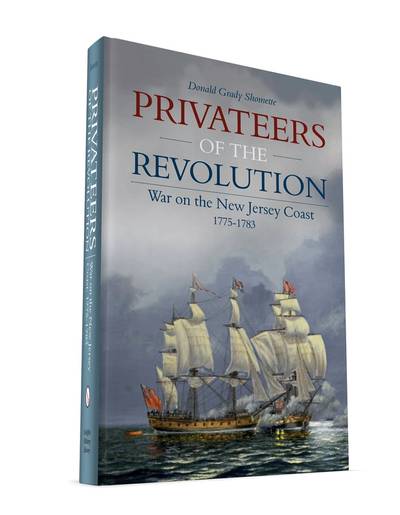 Privateers of the Revolution: War on the New Jersey Coast 1775-1783 is the revelatory narrative of the 538 Pennsylvania and New Jersey privateers, privately owned ships of war some called pirates. Manned by over 18,000 men, these privateers influenced the fight for American independence.

From the halls of Congress to the rough waterfronts of Delaware River and Bay to the remote privateering ports of the New Jersey coast and into the Atlantic, a stirring portrait emerges of seaborne raiders, battles, and derring-do, as well as incredible escapes from the great British prison ships “vulgarly called Hell,” where more than 11,000 men perished.

A work 40 years in the making extracted from archives in both Europe and America, it is a tale unrivaled by any Hollywood fiction.

Size: 6″ x 9″ | 43 color and b/w photos | 448 pp
ISBN13: 978-0-7643-5033-7| Binding: hard cover | $34.99
About the Author: A graduate of Pratt Institute, nationally known maritime historian Donald Grady Shomette served for over two decades as a staff member of the Library of Congress. As a cultural resources consultant and marine archaeologist, he has been engaged by myriad museums, universities, and governments. He has worked internationally under the sponsorships of the National Geographic Society, National Park Service, US Navy, and others. Author of numerous books, and contributor to many encyclopedias and anthologies of history and archaeology, his writings have also appeared in such publications as National Geographic, History and Technology, and Sea History. He is twice winner of the prestigious John Lyman Book Award for Best American Maritime History, a recipient of the Calvert Prize for historic preservation, and holds an honorary PhD from the University of Baltimore.