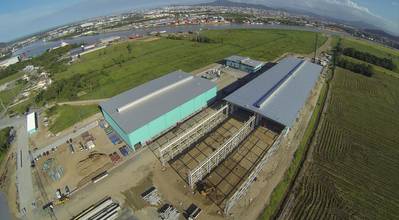 Huisman officially opened its new production facility in Navegantes, Santa Catarina state, in the south of Brazil on Thursday, April 16. The facility is used for the manufacturing of offshore equipment for the Brazilian market. It is located along the Itajai-Açu river, enabling fast installation of Huisman equipment onboard sea going vessels. The new Huisman production facility was officially opened by Cristina Pinho, Executive Manager E&P Services at Petrobras.

Joop Roodenburg, CEO of Huisman, said, “The decision to open a production facility in Brazil is a logical answer to the great Brazilian equipment demand. Being able to produce our equipment locally provides us and our clients with an important competitive advantage. We have proven being capable building factories at green field locations. In China we are currently, successfully building cranes, pipelay towers as well as drilling equipment.”
In 2013, Huisman started the construction of its new Brazilian facility with a first pile March 2014. Since then, phase 1 of the construction has been finalized, including a large production hall, work preparation and welding hall and office. Building activities for the next phase (painting hall, warehouse and test pedestal), are under construction.
The Brazilian Huisman production facility has already been awarded contracts for the delivery of six 65mt Lattice Boom Cranes and four 65mt Knuckleboom Cranes for Sete Brasil and cranes and pipe storage baskets for two 340mt Tiltable Pipelay Systems for Technip-DOF. Furthermore a contract for four anchor handling and towing winch packages was signed with Grupo CBO early this year.