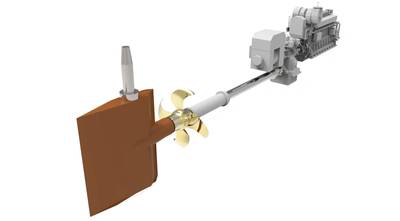 Based in Spain, the Pevasa Group recently ordered a complete propulsion system from MAN Diesel and Turbo for a new tuna vessel. The system is unique in that it comprises a package of three high-efficiency products, including a modern, medium-speed MAN 8L32/44CR engine with common-rail (CR) technology, a Renk RSVL-950 gear unit, and an innovative MAN Alpha VBS1100 CP propeller with Kappel propeller blade designs and rudder bulb. This combination increases the propulsion system’s efficiency by up to at least 9%, thereby helping to decrease costs, fuel consumption, and exhaust emissions.

Pevasa  has a tradition for placing value on new technology: in 2009, the company purchased a structurally identical CR-engine that completed the upgrade of its six-boat tuna fishing fleet. It was thus one of the first customers to opt for MAN Diesel and Turbo’s CR technology, which controls the engine’s fuel-injection pressure and timing to reduce overall fuel consumption.

The Kappel propeller adds another enhancement to the overall package with its special design that reduces the power-consuming vortices formed at the propeller tip region. MAN Diesel and Turbo acquired Kappel Propeller Designs, including all rights, in early 2012 and is currently the sole provider of this cutting-edge technology.

Follow-on orders
“This propulsion package is the most energy-efficient solution that we currently offer,” said MAN Diesel and Turbo’s Frederik Carstens, Head of MSO and Sales Manager of the Medium Speed Business Unit. He believes that Pevasa's order reveals a trend among customers in the marine segment who are increasingly interested in fuel efficiency. Another new order that supports this assessment is that from Italian shipyard, Visentini, which has ordered a complete package consisting of two new Copenhagen, 9L32/44CR engines with CR technology, smooth-running Renk gearboxes, and innovative MAN Alpha propellers.