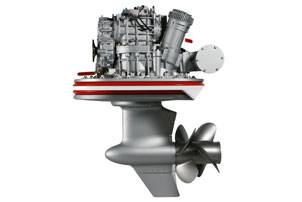 The JMS system is engaged when the Easidock feature is activated via a button touch on the SmartCommand control head. During normal “at sea” operation the 2800 POD drive is restricted to 30 degrees of movement in either direction from center.  This restriction of movement is released in Easidock mode and the POD now has full 180 degree movement. The ZF 185 AC Thruster is also brought online at this time.

As the vessel operator directs the joystick in any direction or combination of directions the JMS system incorporates POD thrust and varying amounts of thrust from the bow thruster.  Proportional control of the thruster means smooth engagement, and only as much thrust as needed to move the vessel in the desired direction. Proportional thrust, combined with an electronic compass tied to the main JMS control unit means there is no vessel yaw during sideways movement.

ZF Marine’s patented iAnchor station keeping functionality is also included in the Single Pod System. With the press of a button, iAnchor will compensate for wind and current holding the vessel’s position to as little as a 3 foot radius.