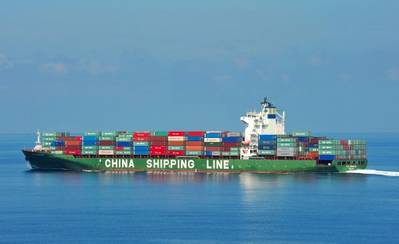 Two shipping companies and their masters have been prosecuted by the Australian Maritime Safety Authority (AMSA) for two separate marine pollution incidents within the Great Barrier Reef.
Tokyo based Perses Maritima Ltd and the master of its Japan registered vehicle carrier Asteria Leader were found guilty on May 18 in the Brisbane Magistrates Court on one charge each of illegally discharging garbage under the Protection of the Sea (Prevention of Pollution from Ships) Act 1983.
A routine Port State Control inspection conducted by an AMSA marine surveyor at Fisherman Island in the Port of Brisbane revealed a record of the discharge of 0.03m3 of food waste within the Great Barrier Reef on October 8, 2014.
Perses Maritima Ltd was fined $5,000 for the illegal discharge and the master of the ship was fined $500.
Hong Kong based company Seaspan Corporation and the master of its Hong Kong registered containership CSCL Brisbane were found guilty of illegally discharging garbage on August 6 last year within the Great Barrier Reef Marine Park.
The illegal discharge was also discovered by an AMSA marine surveyor during a routine PSC inspection at Fisherman Island.
It was also found that the ship’s passage plan did not take into account the required marine environmental protection measures as per the safety of navigation requirements prescribed by the Safety of Life at Sea (SOLAS) international convention.
Seaspan Corporation was fined $6,000 for the illegal discharge and the master was fined $600.
AMSA Chief Executive Officer Mick Kinley said it was disappointing ships were failing to adhere to the measures in place to protect sensitive marine areas, such as the Great Barrier Reef.
But the discovery of the illegal discharges showed Australia’s PSC regime was both rigorous and effective, Kinley said.
“Australia has a robust PSC regime, which is designed to ensure ship owners and their masters are adhering to the rules and regulations to prevent marine areas from being polluted,” Kinley said. “These prosecutions highlight to the shipping community if they flout the regulations they can be caught and subsequently prosecuted.”