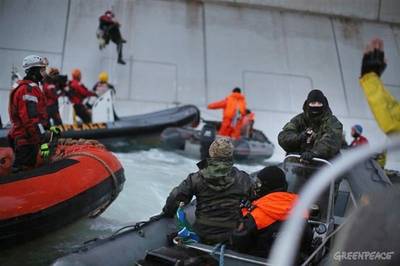 Activists from the environmental organization Greenpeace International attempted to climb aboard Gazprom’s oil drilling platform 'Prirazlomnaya' in the Pechora Sea to stop it from becoming the first to produce oil from the region, reports the Barents Observer.

Five inflatable boats were launched from the Greenpeace ship "Arctic Sunrise" in the early morning hours today and headed for the Prirazlomnaya platform, which the owner Gazprom says is now ready to start drilling . One of the inflatables was confronted by the Russian Coast Guard, and two activists were arrested. Two other activists managed to attach themselves to the oil platform, but were forces to climb down after been hosed with freezing water, Greenpeace reports.

Citing crew members of the "Arctic Sunrise", Barents Observer reported that a total of 11 warning shots were fired across the ship and the Coast Guard threatened to fire at the ship itself if it did not leave the area immediately.