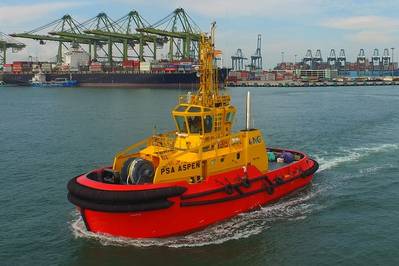 Named PSA Aspen, the Robert Allan Ltd-designed vessel is the first dual fuel tug to enter service with PSA Marine in the Port of Singapore.

The cooperation between Robert Allan Ltd. and PSA Marine began in 2002, with the design of Z-Tech tug series.

Since that time the two companies have developed a close, cooperative working relationship, providing high quality custom-tailored tugs for the international market.

There are more than two dozen of Robert Allan Ltd. Z-Tech, RAmparts and RAstar tugs in the PSA Marine fleet currently.

RAmparts 2800-DF is a dual fuel variant of the popular RAmparts series and is able to operate on either Natural Gas or Diesel Fuel.

By utilizing the RAstar 4000-DF reference design the approval process was significantly streamlined, and the same innovative features used on the reference tug were easily transferred and refined for the new design, providing PSA Marine with an evolutionary tug.

The vessel’s accommodations are outfitted to MLC compliant standards for a crew of up to six personnel. All the crew cabins are outfitted with private en-suite washrooms, with a common washroom located in near the wheelhouse.

Main propulsion for the tug comprises a pair of Niigata 6L28AHX-DF main engines, each rated at 1618 kW at 750 rpm, driving a straight-line steel shaft system to a Niigata ZP-31 Z-Peller propulsion unit with a 2,200 mm diameter fixed pitch propeller and zero to idle slipping clutch.