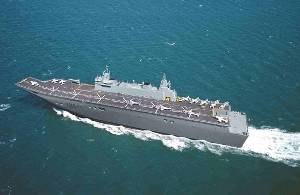 Since naval vessels are exempted from IMO’s pending ballast water treatment requirements, the decision by the Royal Australian Navy to install ballast water treatment systems is a voluntary one. It was made in part to protect Australia’s sensitive coastal environment, which has already been threatened by the invasion of non-native organisms transported via ballast water. Darwin Harbour, for example, was invaded by the South American black-striped mussel in 1999, which necessitated a quarantine and cleanup effort costing over $2m.

Among the other orders is one for a PureBallast 2500 system from Samsung Heavy Industries for the drilling vessel Stena DrillMAX ICE.