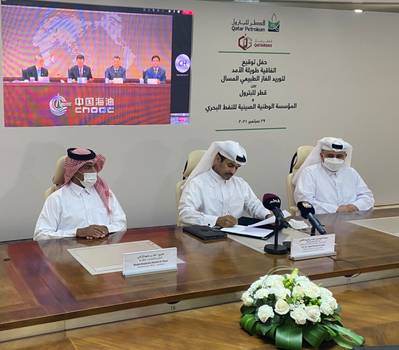 QP will supply of 3.5 million tons per annum (MTPA) of LNG to CNOOC over a 15-year period starting January 2022.

The SPA was signed during a virtual ceremony by Saad Sherida Al-Kaabi, the Minister of State for Energy Affairs, the President and CEO of Qatar Petroleum, and Wang Dongjin, the Chairman of CNOOC.

Al-Kaabi said, “We are pleased to further build upon our strong relationship with CNOOC with the signing of this new long-term LNG supply agreement. We are especially proud to continue to meet the People’s Republic of China’s growing need for cleaner energy that LNG provides, and are thankful to CNOOC for partnering with us as their trusted LNG supplier.”

Al-Kaabi also thanked Sheikh Khalid bin Khalifa Al Thani, the CEO of Qatargas, and the teams from both sides for the successful conclusion of this new long-term LNG supply agreement with CNOOC.

Qatar’s relationship with CNOOC extends back to September 2009 when the first LNG cargo was delivered to CNOOC in China.

As of August 2021, Qatar has delivered a total of 715 LNG cargoes to China, of which 270 cargoes (more than 24 million tons of LNG) were delivered to CNOOC.