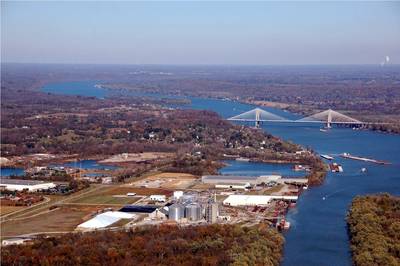 The port of Indiana, Jeffersonville (Photo: Ports of Indiana)

The Ports of Indiana handled nearly 3.9 million tons of cargo during the fourth quarter of 2016, the highest quarterly shipment total in the organization's 55-year history.

The total surpassed the ports' previous quarterly record set in the second quarter of 2015 by 300,000 tons. The state's three ports' shipped nearly 11.3 million tons in 2016, the second highest volume in history and the third consecutive year the ports exceeded 10 million tons annually. Since 2014, the Ports of Indiana has handled 34 million tons of cargo, the highest three-year total since Indiana's ports opened.

Major cargoes included coal, steel, grain, fertilizer and limestone. Shipments of soy products were the highest in Ports of Indiana history, up six percent over 2015, while oil volumes were up nearly 18 percent and minerals increased four percent.

"Thanks to our world-class port companies and other businesses that use our facilities, our ports remain one of the most vibrant port systems in the heartland of America," said Ports of Indiana CEO Rich Cooper. "With our total 2016 shipments more than two million tons higher than the previous five-year average, a global steelmaker announcing plans to build a processing plant at our Jeffersonville port and several existing port companies making significant capital investments during the year, the prospect for continued growth at the ports is certainly encouraging."