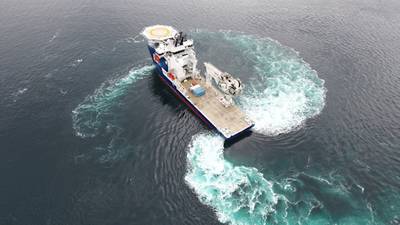 The Norwegian-built vessel will be deployed under a cooperation agreement between Reach and Sweden's MMT. The team has been awarded several frame agreements for survey; inspection, maintenance and repair; and light construction within the oil and gas and renewable sector over the last year.

Reach said the commercial terms of the charter agreement are confidential, but noted the deal is structured to facilitate a competitive subsea services offering for the next 5.5 years.

The DP2 Topaz Tiamat is a 98-meter, diesel-electric light subsea construction vessel with 82 passenger accommodation, equipped with an AHC 120-metric-ton subsea construction crane. It was ordered from VARD Norway in 2015 as part of Topaz's ongoing fleet renewal and reinvestment strategy.

Jostein Alendal, CEO of Reach, said, “We are very pleased to be able to offer a next generation subsea spread to our clients, an energy efficient vessel that fits nicely into our focus markets. The Topaz Tiamat is the first vessel chartered from Topaz, but based on their professionalism and proactive approach, we believe this will be the start of a successful and productive cooperation going forward.”

Rene Kofod-Olsen, CEO of Topaz Energy and Marine, said, “The Topaz Tiamat and its sister vessel Topaz Tangaroa represent Topaz’s strategic reinvestment into the growing subsea segment. This newbuild project was executed counter-cyclically at a time of great turmoil in the broader offshore market, making it particularly rewarding to see the first vessel leave the yard and, as expected, go straight onto a significant long-term contract with a strong subsea partner like Reach.

“The Tiamat and Tangaroa, designed with, and built by, VARD Norway, set new benchmarks in efficiency, operability and cost-competitiveness. These vessels, along with Topaz’s agile commercial mindset and reliability as a counterparty, have allowed us to forge a new long-term partnership with Reach Subsea, and we look forward to continue finding innovative ways of serving the offshore energy industry together.”

Topaz said the charter adds to its revenue backlog which prior to this signing stands at US$1.4 billion.