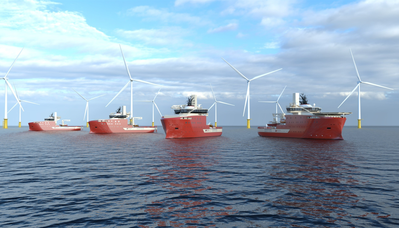 Norway-based crane manufacturer Red Rock has won an order from shipbuilder Vard for equipment supply for a service operations vessel (SOV) ordered last week by North Star Renewables for work on the Dogger Bank offshore wind farm in the UK.

As previously reported, the vessel will be operating on Dogger Bank C and is the third order of a VARD 4 12 SOV.

Red Rock will deliver one 2T 3D Motion Compensated crane, one 2T Boatlanding crane, and one 1T Shipboard crane. Equipment deliveries are scheduled for Q3 2023 to Vard Vung Tau in Vietnam where the vessel will be built.

Red Rock's Senior Sales Officer James Chalmers said: "We are very grateful to have the opportunity to extend our equipment delivery with this fourth vessel which will introduce yet another crane with our 3D Motion Compensation technology. We look forward to working with our long-standing and valued client Vard on these newbuilds and establishing a solid and long-lasting working relation with North Star Renewables."

The group has secured a long-term charter worth about £90 million ($118,7 million) to deliver an additional ship for Dogger Bank C to support offshore wind technicians working in the field, and has ordered the vessel from Vard.

The contract came a week after SSE Renewables, with partner Equinor, reached financial close on Dogger Bank C, the third phase of what will be the world’s largest offshore wind farm, located in the UK North Sea. The two firms are already building the first two phases of Dogger Bank Wind Farm, off the northeast coast of England which, once all three phases are complete in March 2026, will be the largest in the world.

Total investment in Dogger Bank Wind Farm will be around £9 billion (around £3 billion for phase C including offshore transmission).

As for the North Start Group SOV contract for Dogger Bank C, this will be the fourth SOV and associated daughter craft the company has been contracted to build and operate by Dogger Bank’s joint partners Equinor, SSE Renewables, and Eni this year, making North Star the exclusive service vessel operator for the world’s largest wind farm for at least the next decade.

In March, the firm won the initial contract for Dogger Bank A and Dogger Bank B following a competitive tender for the design and delivery of three SOVs in a deal worth an estimated £270 million.

Each of the four Dogger Bank SOVs has been contracted on a 10-year agreement, with three additional one-year options.

Back in July, Red Rock won a contract with Vard to deliver cranes for the first three service offshore vessels (SOVs) Vard is building in Vietnam for North Star Renewables.