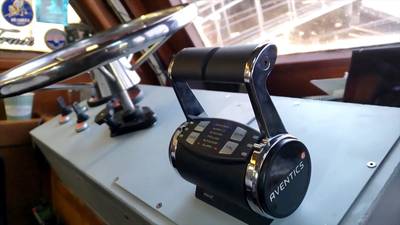 Thanks to its flexible design, ease of use and modular system architecture, the Marex OS III has improved the Falcon’s maneuverability—bringing the boat up to speed with many of the other, newer vessels on “Wicked Tuna: Outer Banks.” (Credit: Kelly Hinkle)

A fisherman from a popular reality television series recently outfitted his vessel with a new electronic control system—giving him the edge in a high-stakes fishing competition.

The waters of the North Atlantic Ocean can be treacherous—especially for fishermen pursuing the elusive bluefin tuna. This pursuit is the subject of the popular reality television series, “Wicked Tuna,” which chronicles the competition between commercial bluefin tuna fishermen in Gloucester, Massachusetts. The show has run on National Geographic since 2012, with its ninth season set to premiere March 1, at 9/8c.

Fishing for bluefin tuna—which can reach 8 feet in length and weigh 1,000 pounds—is not for the faint of heart. The fishing season is short, the tuna population is declining and the pressure to deliver boatloads of the popular fish remains high. Throughout these ups and downs, the fishermen have developed a special relationship with their boats. This bond extends to Dave Marciano, captain of the 38-foot Novi boat named Hard Merchandise, as well as the Falcon—the boat featured in a later spin-off series. Over the years, Marciano and his crew have competed against other boats to haul in as many tuna as they can and even wore the “Wicked Tuna” crown in the show’s fourth season.

In 2014, a new spin-off series brought Marciano to the unrelenting waters of North Carolina’s Outer Banks. There, the captain realized he couldn’t compete with the other fishermen due to the setup of his older vessels, which included outdated boat controls. But all that changed—thanks to a unique collaboration with Emerson, a specialist in automation technologies. 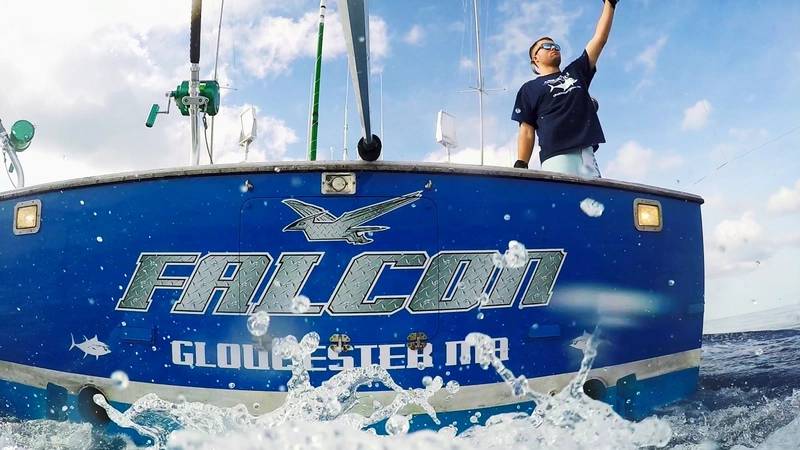 The Challenges of Push-Pull Cable Systems
When the bluefin tuna season ends in Gloucester, it’s only getting started in North Carolina—drawing northern fishermen to the tumultuous seas of the Outer Banks. The ensuing competition between northern fishermen and their southern counterparts spawned the spin-off series, “Wicked Tuna: Outer Banks,” which spotlights Marciano and several other boats from the original series.

Being a contender in this high-stakes competition requires the latest in boat control technology—something Marciano needed to upgrade. His vessel in this series, named the Falcon, integrated push-pull controls—a mechanically connected system that uses cables to connect control heads to the clutch and throttle. In this type of setup, cables are daisy-chained from one control location, or “station,” to the next—making it difficult to add new stations. The force required to operate the levers also increases whenever additional stations are added.

“These heavy cable controls were cumbersome,” Marciano says. “My arms got tired and sore having to constantly move the levers between stations. We were also limited in terms of how many stations we could add.”

Fish By Wire With An Electronic Control System
As fate would have it, Steve Vincent—Manager of Business Development Marine at Emerson—was a fan of the “Wicked Tuna” series. “When I watched the show, I noticed the boats still integrated mechanical levers,” Vincent says. “But when you’re at sea reeling in the large, powerful tuna, you need to be able to maneuver the vessel quickly and efficiently from different locations on the boat. You also have to orientate and change the position of the boat itself.”

Vincent approached Marciano with the idea of upgrading the Falcon’s mechanical control system. “Right away, he saw the benefits and possibilities,” Vincent says.

Vincent works in the marine technology division at AVENTICS, which is part of the Emerson group and manufactures electronic and pneumatic components specific to the marine industry. He suggested equipping Marciano’s vessel with the Marex OS III—an electronic control system for pitch propellers, jet propulsions and reversing gear systems. The system is easy to integrate, accommodates up to six control stations and eliminates the additional force required to manually operate control heads between stations.

“With this system, it doesn’t matter how many stations are on a vessel,” Vincent says. “You can change controls easily with one hand.”

“Previously, on the Falcon, putting the boat in gear and giving it throttle each required a lever,” Marciano adds. “It’s nice to have the throttle and gear contained in one. We went from needing four control levers to maneuver the boat down to two. Now, even my daughter can operate the boat.” 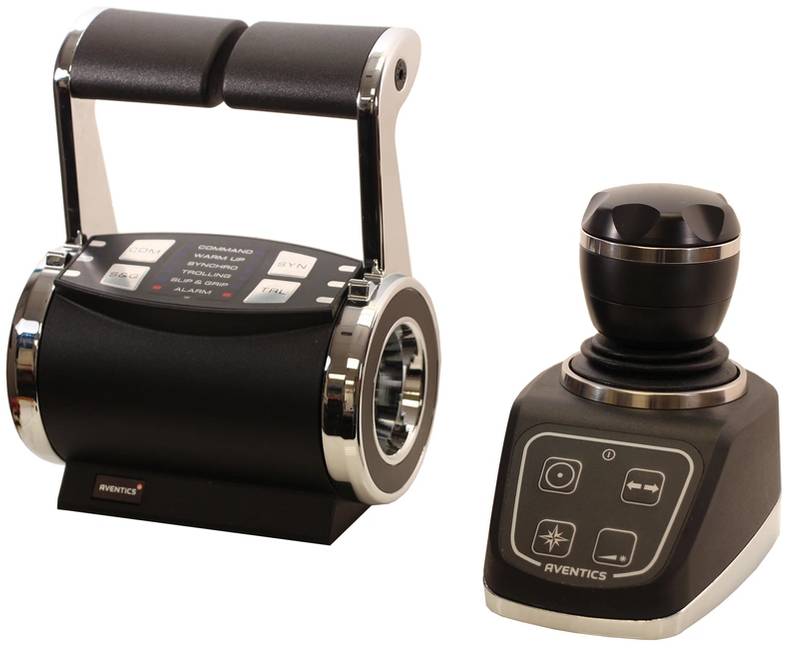 A Flexible Control System that Improves Maneuverability
The Marex OS III system includes several components, including various control heads, a freely configurable display, propulsion controllers, operating modules and other accessories. Marciano selected two different control heads—a taller one for the Falcon’s helm and quarter deck, and then a lower-profile one for the transom where, according to Marciano, he often experiences “the heat of the battle.”

Because the Marex OS III control system isn’t specific to any particular engine or gearbox manufacturer, Marciano also took this opportunity to upgrade the Falcon’s engines. “It ultimately didn’t matter which engine he went with,” Vincent says. “The Marex system works with them all—a feature that sets it apart from other control packages on the market.”

In addition to its flexible design, ease of use and modular system architecture, the Marex OS III includes advanced features that have improved the vessel’s maneuverability. For example, Marciano now has the option to control a trolling valve—an adjustable device incorporated into the hydraulic system that regulates the pressure between 0 and full operating pressure. This feature reduces the propeller speed at a given engine speed, enabling Marciano to achieve speeds that are lower than what is possible for normal gear engagement. As a result, Marciano can now drag bait slowly through the water behind his boat—a fishing method known as “trolling”—and also maneuver the boat in and out of the harbor with greater ease.

Hooked On the New Controls
Integrating the Marex OS III has brought the Falcon up to speed with many of the other, newer vessels featured in “Wicked Tuna: Outer Banks.” It has also had a positive effect on Marciano’s livelihood. “This new system lets me maneuver my boat quickly and efficiently,” the captain says. “I’m happy to say it’s helped me catch more fish—which brings in more money.”

Now, Marciano is in talks with Emerson about updating Hard Merchandise—the original “Wicked Tuna” vessel, which will be helmed by the captain’s son. Marciano’s plans for the boat include many of the same modifications the Falcon underwent, including integrating the Marex OS III electronic control system.

“As a fisherman, my biggest concern is always: can a product do what I want and is it dependable?” Marciano says. “And the answer to both of those questions is yes.” 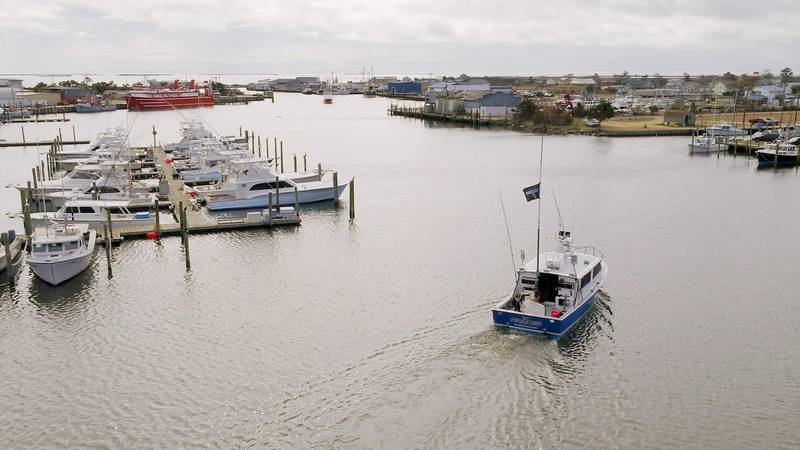