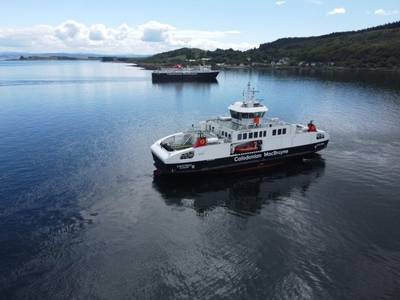 A newly refurbished ferry has been delivered to provide additional capacity for operator CalMac Ferries on the west coast of Scotland.

Purchased out of Norway in 2021 and renamed Loch Frisa, the vessel departed Dales Marine Services in Leith on May 29 for repositioning to Oban where it is undertaking familiarization and entry-in-to service activities.

Starting in mid-June, the double-ended RoPax ferry will be phased into the Oban-Craignure timetable, in tandem with Coruisk. Once Loch Frisa takes over the full Coruisk timetable, Coruisk will reposition to Mallaig where it will operate on the Mallaig-Armadale route. Isle of Mull will continue to operate its normal timetable.

Robbie Drummond, managing director of CalMac, said, "We are looking forward to adding MV Loch Frisa to the CalMac fleet and would like to thank Transport Scotland and CMAL (Caledonian Maritime Assets Ltd) for their efforts in securing an additional vessel. Its arrival will allow us to move MV Coruisk to Mallaig, where she will take up service on the Mallaig-Armadale route."

CalMac Ferries is under government contract to run ferries in the Clyde and Hebrides. The vessels it operates are owned by state-owned CMAL, and funding, timetables and contract scopes are managed by Transport Scotland.

CMAL had been searching for suitable secondhand vessels to join the CalMac fleet, and in October 2021 it confirmed the purchase of the 49.9-meter Utne, designed by Norway's LMG Marin and built by Sefine Shipyard in Turkey in 2015 for Norled's operations on the Norwegian fjords. Norled, which has been selling off its diesel-powered vessels to make way for zero-emission battery-electric vessels, let go of Utne for €6.6 million ($7.1 million).

Propulsion machinery on board consists of two Scania DI16 diesel engines, each with an output of 440 kW v/1,800 rpm, and a pair of Veth Propulsion VZ-700-CR azimuth propulsion thrusters. The power supply is provided by two Scania DI9 motors, each of 150 kW v/1,500 rpm, and Leroy Somer generators.

The vessel, since renamed Loch Frisa, underwent approximately £3.4 million ($4.3 million) in refit work, including manufacturing and installing a new ramp, replacing lifejackets and other lifesaving appliances to ensure they meet U.K. standards, upgrading the marine evacuation system and life raft deployment, as well as some mooring works.

Scottish Minister for Transport Jenny Gilruth said, "The purchase and deployment of the Loch Frisa is an example of the government working to support secondhand tonnage for island communities. I'm sure it will be welcomed by local residents and visitors to Mull, but I know there is more to do.

"The government recognizes that having confidence in ferry services is vital for those who live and work on the islands and that's why we have committed £580 million ($728.3 million) to fund new ferries and port investments over five years. We will continue to work with CMAL and CalMac in the meantime to secure much needed additional improvements for our island communities."

The Mull & Iona Ferry Committee, which represents the interests of the ferry users locally, welcomed the year-round "Island-focused" service enabled by the new fleet addition, but pointed out a number of the vessel's shortcomings, including questionable weather reliability, slow service speeds, reduced car and passenger capacity and a deep draft that limits possible service routes.

"The Utne was designed for service in a sheltered Norwegian fjord, on a crossing of just 2.5 miles. Her low power in conjunction with her small size leads many to predict plenty of cancellations in winter," according to the committee. "With a service speed of just 12 knots, she is slower than the Coruisk she replaces, and much slower than the Isle of Mull. Crossing times will be increased."

"A vessel with a capacity of 40 cars is being replaced with one of just 34. That is only going to make our summer crisis deteriorate, and seems a bizarre decision for one of the most congested routes in the CalMac network. On every day in summer, we will have 5% fewer vehicle spaces than before." the committee added.

The newly launched Maggie Cat, an Incat Crowther 31, will partner with Coolgaree Cat in a refreshed Sealink line-up operating out of Townsville.

A new hybrid-electric tugboat due for delivery by end of December 2022 will be the first of its kind to operate in Japanese waters.The vessel…