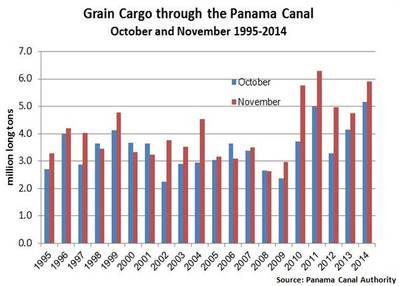 Based on the analysis by the Panama Canal’s Marketing Division, in October, a total of 5.2 million long tons of grains were transported through the waterway, the highest level recorded since October 2011. In November, tonnage is likely to reach close to the record cargo tonnage of 6.3 million long tons of November 2011. Transits of Panamax-sized dry bulkers, with beams between 100-106 feet, have increased 22% given the surging grain trade.

“It is expected that grain cargo movements will continue firm until the grain harvest begins in the Southern Hemisphere and additional grain supplies enter to compete in the market,” said Panama Canal Administrator Jorge L. Quijano.

Prices for major grains have declined in response to good production numbers and expectations that less corn will be required in the United States for ethanol production, which has contributed to increased grain demand from Asian buyers.

The surge in grain cargo flows through the Panama Canal has been particularly strong for shipments from the US Gulf to China,” explained Maria Eugenia Sánchez, Senior Trade Specialist for the Panama Canal Dry Bulk Market Segment.

Corn, soybeans, sorghum, and wheat destined to China shared 81% of total grain tonnage through the waterway, up from 71% a year ago.