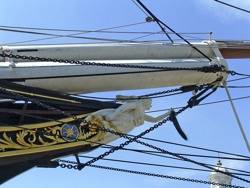 The restored Cutty Sark will be re-opened by Queen Elizabeth II five years after the 19th century British tea clipper was ravaged by fire, according to a news report in The Independent newspaper.

The three-masted ship, one of Britain's maritime treasures, has been restored to its former glory at a cost of £50 million.

She now once again stands proudly in the heart of Greenwich in south London, but the ship has been raised three metres in the air, allowing visitors to walk underneath her hull while protected from rain by a glass roof.

That allows visitors to see the innovative design which enabled her to sail from Sydney to London in 1885 in a then-record 73 days.

The fire in May 2007, caused by an industrial vacuum cleaner that overheated, burned through all three of the ship' decks.

But Chris Nash, the architect who oversaw the project, said it was fortunate that the fire struck when restoration had already begun on the ship.

“The fire caused a great deal of damage but luckily at the time the important historic parts of the ship had already been taken off and were in storage. That was good luck,” he said on Tuesday.

Nash said the technological sophistication of Cutty Sark made it the equivalent in its time of the supersonic Concorde jet.