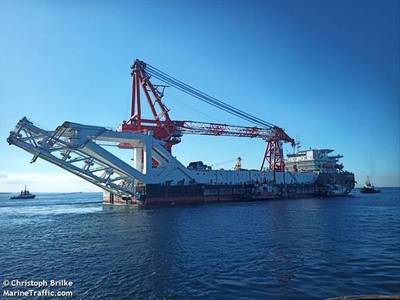 The Russia-led Nord Stream 2 consortium said on Thursday that work to lay its subsea gas pipeline to Germany would resume in Danish waters on Jan. 15, the TASS news agency reported, despite pressure from the United States for construction to stop.

Russia said on Wednesday it was confident of completing the project, although two sources said the U.S. State Department had this month told European companies suspected of helping to build the pipeline that they faced possible sanctions.

Nord Stream 2 has not responded to a [Reuters] request for comment.

Nord Stream 2, designed to double capacity of the existing undersea Nord Stream gas pipeline from Russia to Germany, has become a point of contention between Moscow and Washington, with the United States seeking to cut Europe's reliance on Russian energy.

The United States also plans to increase sales of shipments of its liquefied natural gas (LNG) to Europe.

The group behind the pipeline suspended works in December 2019 due to the threat of sanctions from Washington. It resumed construction last month in shallow German waters.

The consortium, led by Russian gas giant Gazprom, still has to lay more than 100 km (62 miles) of the pipeline, which will have annual capacity to pump 55 billion cubic meters of gas. More than 90% of the project has been completed.

After several false starts, 2021 is the year when the U.S.offshore wind industry begins to realize its potential. This is according to Philip Lewis…