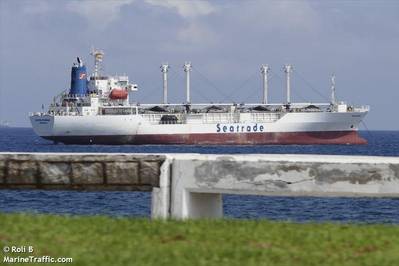 Image by Roli B - MarineTraffic.Com

Maritime security intelligence agencies have reported that the Water Phoenix reefer vessel was boarded Tuesday morning off Nigeria by an unknown number of persons and that two Russian nationals have been kidnapped.

"According to the initial reports, the perpetrators managed to board the vessel and kidnap the master and another crew member, both Russian," Praesidium said, adding that the crew includes 18 seafarers, of which seven Russians and 11 Filipinos.

Apart from the two crewmembers who have, reportedly, been kidnapped, the rest of the crew managed to retreat into the citadel.

The Water Phoenix is a reefer owned by the Dutch company Seatrade Groningen.

"AIS tracking indicates that the vessel was on route to Lagos at 14kts and undertook evasive maneuvers before coming to a stop and is currently drifting," maritime safety intelligence group Dryad Global informed.

Praesidium said Tuesday that the same vessel had been involved in another piracy incident in April 2019, around 80 nautical miles southwest of Brass, Nigeria. The attack was foiled after warning shots forced the perpetrators to abort their attempt.

According to Dryad, the attack on Tuesday was the 13th reported incident in waters of the Lagos Port Complex and Anchorage in the past 12 months "most of which have manifest as boarding for theft."

"This is the 3rd offshore incidents in the waters south of Lagos within 2020," Dryad said.

Per Dryad, 93 personnel have been kidnapped from vessels in incidents off West Africa in 2020, so far.

"The wider Nigerian EEZ remains the global heartland of maritime crime and piracy with incident volumes exceeding those of other areas. It is the 42nd incident in Nigerian TTW in the past 12 months," the maritime intelligence agency added.