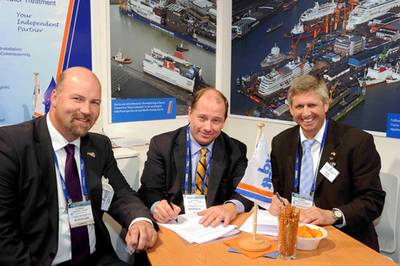 Lloyd Werft will in the future be represented in the U.S., Canada, Mexico, Bermuda, the Bahamas and Costa Rica by Vogler Marine Agencies LLC.

Lloyd Werft Bremerhaven will have a stronger presence from now on in one of its most important core markets. Vogler Marine Agencies LLC, which has been one of the most successful international agencies since 1995, will represent all of the yard’s production sectors, not only in the U.S., but also in Canada, Mexico, the Bahamas, Bermuda and Costa Rica with immediate effect.

Lloyd Werft Managing Director Rüdiger Pallentin agreed on the co-operation with Don Vogler during the recent Cruise Shipping trade fair in Miami. Vogler has worked with his company in Flemington, N.J., since 1995.

“There is hardly anyone more closely linked to the ship repair business than Don Vogler,  a professional with many years of experience,” said Pallentin.

In addition, Vogler is the exclusive representative of well-known manufacturers of ship equipment and also works closely with North American shipping companies – a combination which Pallentin hopes will have particularly positive benefits for Lloyd Werft. This concerns not only cruise shipping companies, but also those companies operating container ships, vehicle transporters, bulkers and tankers and with which Vogler Marine Agencies LLC enjoys an outstanding reputation.