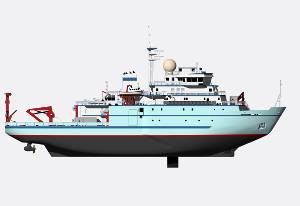 Image courtesy of the University of Alaska Fairbanks

More than three decades ago, marine scientists in the United States first identified the need for a research vessel capable of bringing scientists to Alaska’s icy northern waters. The University of Alaska Fairbanks has announced its intent to award a $123m contract that will meet that need. The university has selected Marinette Marine Corporation of Marinette, Wis. to build the 254-ft Alaska Region Research Vessel.

When complete, the vessel will be one of the most advanced university research vessels in the world and will be capable of breaking ice up to 2.5 feet thick. According to project leaders, the ARRV’s home port will be in Alaska, most likely at UAF’s Seward Marine Center.

“Ocean scientists need this ice-capable vessel now, more than ever before, to study the changes occurring in arctic waters,” said Denis Wiesenburg, a co-principal investigator on the project and the dean of the UAF School of Fisheries and Ocean Sciences.

The $123m for the ship construction contract is funded entirely by the American Recovery and Reinvestment Act.  The total cost for the project is $200m.

“In the short term, constructing this world-class research vessel will create American jobs to help our nation pull out of the current recession,” said Sen. Mark Begich. “The University of Alaska has dreamed of having a new research vessel for decades and I am thrilled to see work will soon get underway through the American Recovery and Reinvestment Act. Once complete, the ARRV will be a state-of-the-art platform to conduct the scientific research necessary for Alaskans to understand the challenges we’re feeling from climate change and its implications on the changing arctic environment.”

The vessel will be owned by the National Science Foundation and operated by UAF as part of the U.S. academic research fleet. It will be used by scientists in the U.S. and international oceanographic community through the University-National Oceanographic Laboratory System. The vessel was designed by The Glosten Associates, a marine architecture firm in Seattle.

After the ship has been completed, the crew will take the vessel from the shipyard through the Great Lakes-St. Lawrence Seaway transit system and the Panama Canal to Alaska in 2013. While in transit, scientists and crewmembers will test the scientific components of the ship in preparation for unrestricted science operations beginning in 2014.

In addition to its ice-breaking capabilities, the ARRV will allow researchers to collect sediment samples directly from the seafloor, host remotely operated vehicles, use a flexible suite of winches to raise and lower scientific equipment, and conduct surveys throughout the water column and sea bottom using an extensive set of research instrumentation.

The ship will be able to transmit real-time information directly to classrooms all over the world. The vessel design strives to have the lowest possible environmental impact, including a low underwater-radiated noise signature for marine mammal and fisheries work. The ARRV will have accommodations for up to 26 scientists and students at a time, including those with disabilities.

Norwegian shipbuilder Vard announced it has secured a NOK 500 million $47.8 million) contract to design and build a stern…