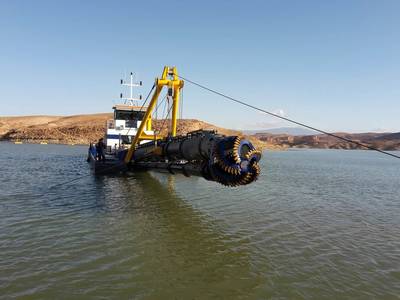 The Damen Field Service crew has just returned from commissioning the Barracuda cutter suction dredger in Algeria. The customised Damen Cutter Suction Dredger (CSD) 500 has been delivered with a complete dredging package including a booster station and dredge piping enabling immediate start up. The CSD500 will perform maintenance dredging in a reservoir.

As reservoir dredging can be quite a challenge, the standard dismountable CSD500 has been customised. Its job is to clear a water reservoir in an inland location in Algeria. As it is relatively deep, the CSD500 has been fitted out with a longer cutter ladder for the important dredging depth of -18m working at 45°. Moreover the spuds – normally a distinct feature of any CSD– have been replaced by an X-mas tree. The X-mas tree is a multiple wire-based mooring system independent of the deep waters in which the dredger operates.

The cutter suction dredger is also fitted out with a number of standard options such as an accommodation unit, navigation lights, a deck crane and dredging instrumentation. Moreover, it is accompanied by all components for a turn-key dredging project. These components include a remote controlled booster station, type BS500, plus some 4 km of floating and land discharge piping – in total over 30 containers full of steel and flexible piping and floats.

The Algerian customer Hydrodragage has two other Damen dredgers performing similar tasks at other reservoirs. Damen is proud to have delivered it’s third dredger to Hydrodragage, which started its dredging job without delay upon arrival.