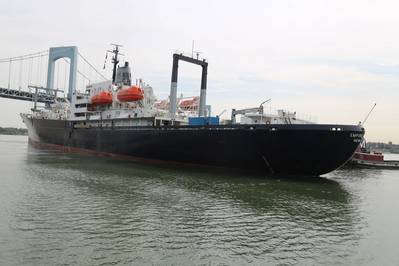 SUNY Maritime College’s training ship has returned to campus Tuesday after nearly two months aiding hurricane relief workers in Florida and Puerto Rico.
The ship Empire State VI was used to provide power, housing, food and water to emergency relief workers, first in Florida following Hurricane Irma, then in Puerto Rico after Hurricane Maria.
Empire State VI is owned by the Maritime Administration, a branch of the U.S. Department of Transportation, and used by Maritime College throughout the year to educate and train future maritime industry professionals.  The federal government can activate the vessel to assist with response and recovery efforts in times of national need, such as after Hurricane Sandy and Hurricane Katrina.
“The past two months demonstrate the value of the state maritime academy training ships in times of national need such as these, as well as training America’s future mariners,” said Rear Adm. Michael Alfultis, president of SUNY Maritime. “I am pleased to welcome home Capt. Rick Smith and the crew of the Empire State VI and to thank them for their service.”