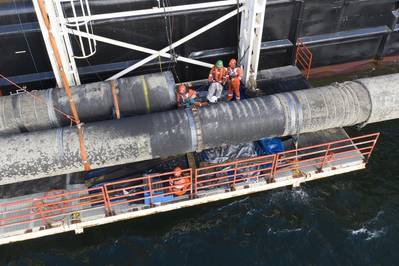 Germany is betting the U.S. administration will take a pragmatic approach to the Nord Stream 2 project to ship Russian gas to Europe and is pushing for the pipeline’s completion in defiance of U.S. opposition, officials and diplomats said.

To try to block the $11 billion project, led by Russia’s Gazprom, successive U.S. administrations have imposed sanctions on some entities and warned other companies involved in the project about the sanctions risk.

President Joe Biden thinks the pipeline under the Baltic Sea to Germany is “a bad idea for Europe,” the White House has said.

Berlin is calculating the best strategy is to present the United States with a done deal in the form of a finished project, diplomats and officials said.

The pipeline is already around 95% built, and could be finished by September, analysts who monitor tracking data say, leaving the Biden administration little time to come up with more measures to thwart it.

“Berlin is trying to buy time and make sure that the construction is finished, because they think that once the pipeline is onstream, things will look differently (to the United States),” a senior EU diplomat briefed on the issue said.

Like other officials who spoke to Reuters, the diplomat declined to be named because of the sensitivity of the issue.

Although Washington has publicly said it will keep working against Nord Stream 2, German officials and EU diplomats believe there is room for negotiation.

"Berlin believes there’s a willingness in Washington to talk about this and find a solution,” a second EU diplomat also briefed on German thinking said.

Berlin has yet to begin substantive discussions with the Biden administration on Nord Stream 2, and does not definitively know the U.S. position.

While Biden opposes the project, however, he is also attempting to repair relations with Europe.

“We don’t see this as something where the U.S. has to come to the table with options. This is a German problem that the Germans actually created,” the official said.

Germany has no plans to make proposals either.

“We are not presenting a list of offers – nor has the U.S. government demanded anything,” a senior German government official said.

German Foreign Minister Heiko Maas is waiting for his first face-to-face meeting with U.S. Secretary of State Antony Blinken, possibly at the end of this month if Blinken attends a meeting of NATO foreign ministers in Brussels, German diplomats said.

Maas has defended Nord Stream 2 as a private, not a political enterprise and the companies involved have repeatedly said the justification for the link is commercial.

Germany also says the pipeline will give Europe greater security from gas supply disruptions, and that it has protected Kyiv by ensuring Russia continues to export some of its gas via Ukraine.

Some Biden administration officials, while repeating their opposition to Nord Stream 2, say Washington needs to be pragmatic about what it can realistically do after two previous U.S. administrations failed to stop the pipeline.

“The context here is important too, I mean, it’s a difficult inheritance,” said one of two State Department officials that spoke to Reuters.

Some senior U.S. officials, recognizing that the pipeline is nearly complete, have urged the Biden administration to consider easing pressure on Germany and focus instead on how to leverage Nord Stream 2 in the event of future crises.

“If we can’t stop the pipeline, then how can we make the best of it once it is done,” one of the senior U.S. officials said.

Last month, a former German ambassador to the United States floated the idea of a compromise between Washington and Berlin that would have given the completed pipeline a use as political leverage.

Under the plan, Germany’s energy grid regulator could be empowered to stop gas flowing if Russia crossed a line.

Triggers for what the former envoy, Wolfgang Ischinger, called an “emergency brake” might include a flare-up in violence between Ukraine and Russia, which annexed Ukraine’s Crimea peninsula in 2014, or if Moscow sought to undermine Kyiv’s existing gas transit infrastructure.

Designed to ease U.S. concerns, the proposal garnered interest among senior European officials and diplomats outside Germany, and in parts of the German government.

But it did not gain traction with the German government as a whole, because of practical problems implementing it, and because Berlin did not feel a pressing need to offer a compromise to Washington.