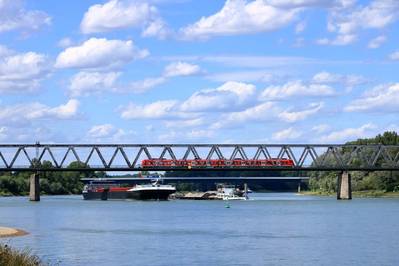 Freight shipping on the river continues but with vessels sometimes forced to sail 75% empty.

The water level is particularly low at the chokepoint of Kaub near Koblenz. The reference waterline level at Kaub was only 56 centimeters on Friday, vessels need about 1.5 meters of waterline to sail fully loaded.

Spot prices for a liquid tanker barge from Rotterdam to Karlsruhe, south of Kaub, rose to about 94 euros ($96.15) a tonne on Friday, up 2 euros on the day, moving even further away from prices around only 20 euros a tonne in June, vessel brokers said.

“We are continuing to sail but we can only load about 25% to 35% of vessel capacity,” said Roberto Spranzi, director of the DTG shipping cooperative that operates about 100 vessels on the Rhine. “This means customers would often need three vessels to transport their cargo instead of one.”

Navigation authorities do not close the river at times of low water, leaving it to vessel operators to decide when to stop.

“We will continue sailing while it is navigationally possible,” Spranzi added.

Chemicals group BASF said its output has not been affected but it could not rule out production reductions by individual plants in the coming weeks.

BASF was concentrating efforts on chartering vessels suitable for shallow water and has sought transport alternatives such as railways.

Shipping capacity is already tight because of increased demand after Germany’s move to increase coal-fired electricity generation as it braces for reduced gas supplies from Russia, he said.

Large numbers of vessels have also transferred to the river Danube to transport Ukrainian grain exports that cannot be moved by sea, he said.

The Rhine is an important shipping route for commodities including grains, chemicals, minerals, coal and oil products including heating oil.