RIBs: Turn Up the Power 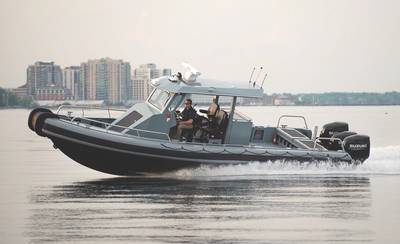 However readers might define “normal”, 2020 was anything but. But the business of rigid inflatable boats (RIB) has been going at full throttle.

Matthew Velluto, Director of Business Development and Marketing at RIBCRAFT USA, based in Marblehead, Mass., described a business moving steadily ahead, though it’s had to weave and bob at times during 2020. “We’ve been able to stay open throughout 2020, with no disruptions on our side,” though he acknowledged hiccups further down in the company’s supply chain. He explains that the business was deemed to be “essential”. RIBCRAFT, which serves military, first responders and the leisure and yachting markets, produces only RIBs. Velluto said, “This enables us to specialize, we don’t diversify the product line, as others do, but we diversify the markets that we serve.” The company builds boats ranging from 15 to 41 feet, with rigid inflatables offering “incredible stability and ability to carry heavy loads,” Velluto said, adding that “with the inflatable collar, it gives you a fendering system that let’s you come up alongside boats…”, this being applicable for multiple uses including being deployed off a Navy ship.

When asked about whether the market for RIBs was “recession-proof”, Bob Clark, who is the contracts manager at MetalCraft Marine, with both U.S. and Canadian subsidiaries on the eastern fringes of Lake Ontario, told Marine News, “It is hard to confirm that the RIB market is recession-proof. We have not had a real recession in a long time, but based on 2020, it does seem to be pandemic-proof.” Clark pointed to the importance of incentives from multiple layers of the government, saying, “If there is no COVID support money rolled out to the municipalities and states, there may be a drop in sales in those areas,” adding, “However, the federal government hasn’t started with stimulus purchasing as yet.” But business has continued. In late September, six months in to COVID-19 disruptions, MetalCraft Marine US delivered two high performance 34-foot boats to the Department of Natural Resources Police, in Mississippi. The boats, sporting triple Suzuki 300-horsepower outboard motors and capable of reaching speeds of 64 miles per hour, will be used in the state’s bay areas along the coast, and out offshore, checking on compliance by commercial and sport fishing fleets.

Todd Salus, vice president, sales and marketing for Ocean Craft Marine, based in Annapolis, Md. described some concerns about business earlier in the year, but told Marine News, “2020 is shaping up to be a banner year for us,” adding that most of the professional business (law enforcement, government agencies and the like) sees budgets allocated well in advance, with solicitations “promulgated six months or even a year ago.” He pointed out that the leisure segment, roughly 10% of the firm’s business, has seen a pickup in sales of amphibious craft with COVID-related relocations of affluent city dwellers to waterfront homes. “Early in the year, we were worried,” Salus explained, “but, happily, we are at a point now where we are struggling for our product to keep pace with our orderbook.” In Maryland, he notes, “businesses supporting the military and law enforcement, as well as those producing conveyances” were exempt from shutdown requirements. 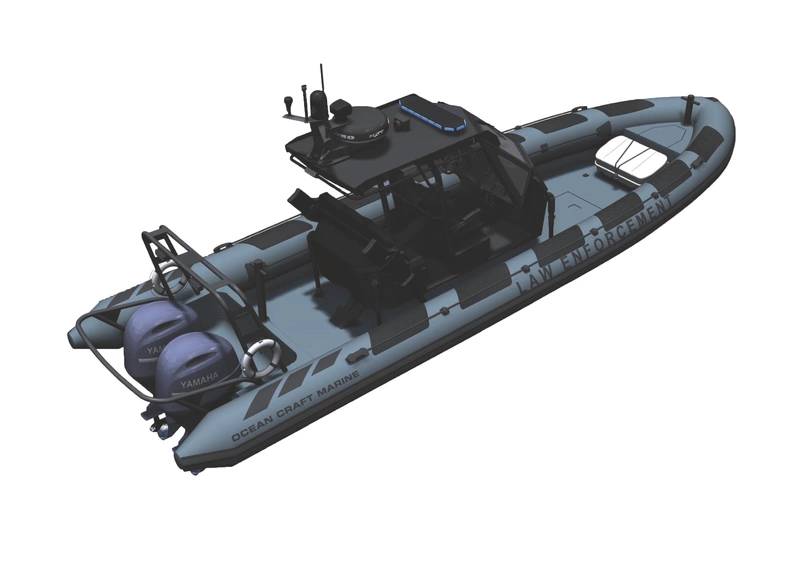 The industry has supported a customer base that has been facing its own unprecedented challenges. “These are challenging times for all of us, but especially for front liners like our first responders,” said Bob Beck, director of sales and marketing for Lake Assault Boats, headquartered in Superior, Wis. “As a manufacturer supplying them with vital products and services, we feel fortunate to have excellent personnel and manufacturing resources along the shores of Lake Superior, combined with a first-class network of regional sales managers and dealer organizations. Our team is driven to deliver quality and long-term value in every craft, including Lake Assault’s growing line of rigid hull inflatable boats.”

Versatility is also a key design consideration. Earlier in the year, RIBCRAFT announced that it had been awarded an estimated $43 million U.S. Navy deal, for as many as 48 11-meter boats designed for explosive ordinance disposal mine counter measures in both shallow and deepwater operations. According to the company, each vessel, with an overall length of 39 feet, will be equipped with twin Cummins QSB-6.7 473 HP diesel engines, twin HamiltonJet 292 water jets, and Shockwave shock mitigating seating for improved crew comfort in all conditions. The boats have special features in support of their mission. The designs offer the possibility for holding rubber raiding craft, or, alternatively, for handling unmanned underwater vehicles. RIBCRAFT added, “A critical operational requirement for these boats is that they must be transportable around the world by land, air or sea and be able to be readily deployed from a variety of U.S. Navy ship classes.” The company had been providing 7-meter shipboard inflatables to the Navy since 2014.

The industry structure supports the learning curve, where series production builds reliability and lowers costs (compared to one-offs), while enabling customization around the basic design. Unlike the commercial world, buyers of inflatables have joined together in sourcing vessels. Lake Assault’s Beck told Marine News, “Moreover, through purchasing cooperatives such as GSA [U.S. General Services Administration] and HGAC [a coop arrangement in Texas], departments are able to more easily spec a custom craft that fits the needs of their organization.”

Lake Assault’s customers include the St. Croix County Sheriff’s Department, bordering Minnesota, in western Wisconsin which has purchased the company’s 24-foot craft. Deputy Chase DuRand, of the St. Croix County Sheriff’s Office, said, in a Lake Assault website post, “Our stretch of the St. Croix River is a heavily used recreational area, with many cabin cruisers, houseboats and all types of pleasure craft while, further north, the National Park we cover is very popular with kayakers and other silent sports enthusiast.” The boat features an overall height less than 13-feet 6-inches and a person and cargo capacity of 3,000 pounds, and is able to operate in as little as 21-inches of water for easier access to shallow areas, and it is fitted with a bow-to-beach access door and ladder located at the front “V” of the bow. According to DuRand, “The fold-down bow door will make deploying officers onto islands much more efficient…it’s an idea we brought to Lake Assault and they were very willing to accommodate our request.” 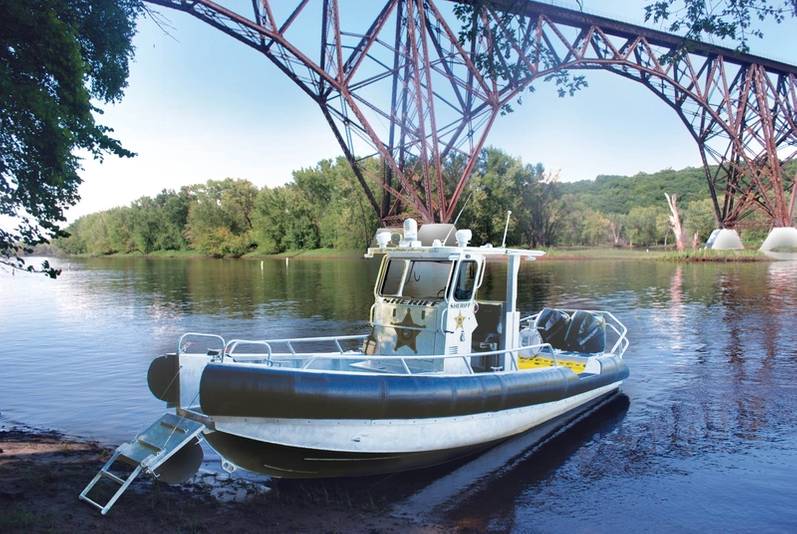 Though law enforcement and military are important RIB segments, boats are also deployed in diverse market tranches, including offshore energy. Ocean Craft Marine, describing deployments in the offshore oil and gas fields, noted, “Some of these boats are rigid hull inflatable boats (RHIBs) which are mainly used by the oil companies for daily offshore transport of personnel and equipment or for platform security-zone enforcement.” The company stressed regulatory requirements for spark-free diesel propulsion in the sector, and urged buyers to consider outboard engines, along with deploying anti-slip coatings for crew safety. Salus also said that his company has its eyes on renewables: “We are looking at offshore wind; we’ve done work on projects involving tidal energy generation.”

In all maritime businesses, the environment and sustainability generally are of paramount importance. Ocean Craft recently gained an award from an enforcement division within National Oceanic and Atmospheric Administration (NOAA). Salus said, “We are building boats for their Pacific Island Division, which is based in Honolulu. They have a maritime law enforcement branch that enforces restrictions regarding fishing, and also whaling.” Following up on the earlier discussion of budgeting cycles, he told Marine News, “That was budgeted probably around October of 2019.”

In May, 2020, RIBCRAFT announced the delivery of two new RIBCRAFT 5.85s to California’s Department of Fish and Wildlife, to a District covering all of Santa Barbara, Ventura, Los Angeles and San Diego counties, to be used for patrol and enforcement operations. The company explained that: “At just over 19 feet, these RIBs can be easily trailered and launched while still delivering excellent open water performance along the southern California coast.” The company has also been awarded with an order for RIBCRAFT 5.85s that will be deployed from the department’s patrol vessels.

Customization is an integral part of the rigid inflatable sales process. RIBCRAFT’s Velluto, elaborating on the California order, explains that his company “worked with the department to build a boat that meets their diverse operational requirements. Featuring a forward positioned center console with front bench seat, two side by side Shockwave suspension seats, heavy duty T-top with windscreen, and a complete Raymarine electronics package. The 19-foot RIB provides a comfortable platform for long patrols in both open and protected waters, while offering an open deck for officers and gear. Powered by a 115-horsepower Yamaha, this 5.85 will reach speeds in excess of 40 miles per hour while still providing unparalleled safety and unsurpassed performance.” 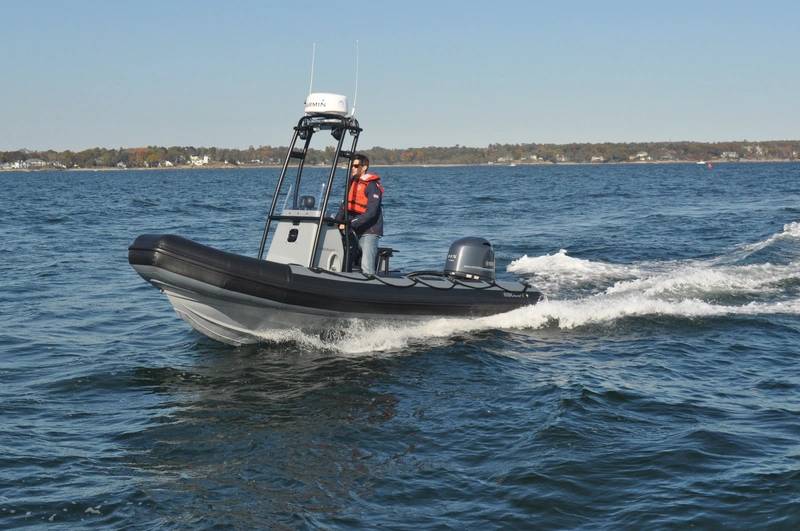 RIBCRAFT 5.85 for California Department of Fish and Wildlife
(Photo: RIBCRAFT)

Across the maritime spectrum, “alternative” fuels are getting a fresh look. Zodiac, with a long history, has now teamed up with engine maker Torqeedo, and is offering an electrically propelled boat, eJET 450, with a hydrojet. The 4.5-meter boat gets 90 minutes of range at 24 knots, or if slowed down to 5 knots, 8 hours.

Rigid inflatables have also found their way into the yachting or travel scene, acting as tenders for large boats, or as small boats in their own right. Brix Marine, formerly known as Armstrong Marine, based in Port Angeles, Wash., is among firms serving the RIB tender craft space, as well as tourism, patrol and rescue and even pilot customers. Elsewhere, inflatables from industry stalwart Zodiac might be found on a close-up whale watching cruise, besides their well-known place in harbor patrol missions. RIBCRAFT has a marketing focus on yacht clubs, which may be managing a sailing program for teenagers, or umpiring a prestigious race or regatta, while Ocean Craft Marine had pointed to the waterfront home segment.

Economic uncertainties will not disappear, but a continued uptick- and likely additional stimulus initiatives as the 2020 U.S. election dust clears, could present a backdrop for continued strength for RIBs.